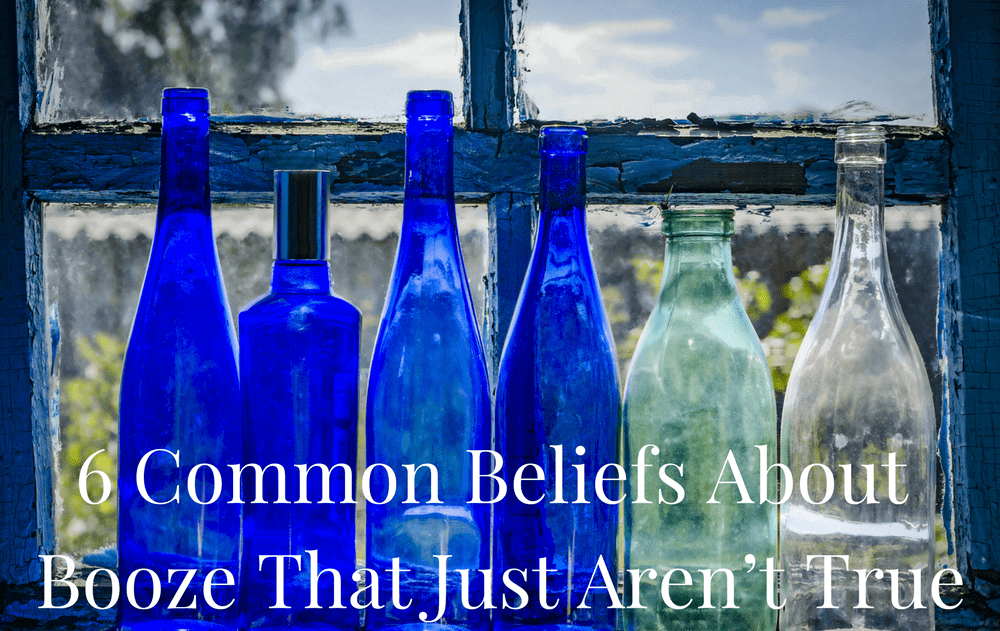 I hope you’re having a good sober October!
.

I’m thrilled to be back after taking a few weeks off to launch another live session of my Getting Unstuck course. (Missed it? You can catch the next class in January)

The Sober School has grown a lot over the past year, as has the entire alcohol-free, online sober movement. The idea of taking some time off from drinking is becoming more and more normal, which is great news for all of us! Anything that makes our alcohol-obsessed world a little less boozy has got to be a good thing.

If you’re working on a sober October right now, today’s blog post will really help you to stay motivated.

I wanted to set the record straight on a few common beliefs about booze that I hear ALL the time. The last thing you need are myths and misguided philosophies​ getting in the way of your alcohol-free lifestyle!

.
Here are 6 common myths about alcohol:

The Committee on Carcinogenicity (an independent body that advises the government whether substances are likely to cause cancer) says drinking ANY level of alcohol increases the risk of a range of cancers. You can read their report here.

As for that old idea that red wine is good for the heart? It’s an outdated myth. England’s Chief Medical officer calls it an ‘old wives tale’ for good reason. This 2014 study found that drinking alcohol provides no heart benefit at all, and recent government guidance stated “there is no justification for drinking for health reasons.”

“Alcohol helps me deal with stress.”

A glass of wine won’t stop the kids fighting or make your boss nicer or fix your relationship. Alcohol does not have the power to solve the things that make you stressed. What alcohol can do is increase anxiety whilst hangovers lower your resilience to stress. So it’s a double whammy – you lose out twice.

It’s socially acceptable to say that you drink because you’re stressed, but what most people are really doing is drinking to numb out. And if you’ve ever been hysterically happy or extremely sad whilst drunk, you’ve got to wonder – does alcohol really do that good a job of numbing your emotions? (Surely, if it was an effective numbing agent, you wouldn’t be able to feel any emotion?)

Drinking might help you crash out by making you drowsy, but it also stops you from having the deep, restorative sleep you need in order to feel truly rested. That’s why you often wake up at 4am, exhausted but somehow unable to sleep.

Some people struggle with their sleep when they first stop drinking and it sucks, I know. But please be patient – the solution isn’t to go back to drinking! Alcohol really screws up your sleep cycle and your body is just taking a bit longer to adjust. Hang on in there – in the long term, an alcohol-free lifestyle is one of the best things you can do to improve the quality of your sleep.

Maybe you think you’re the life and soul of the party after your third gin and tonic. Perhaps you’re convinced that the drunk you is a happier, more upbeat version of your regular self. The idea that we transform into different people when we’re under the influence is a popular one. Turns out, though, ‘drunk you’ might not be as much of a thing as you think.

A new study from the University of Missouri has found that other people can’t see that much of a difference in our personalities when we’re drunk, compared to when we’re sober. This is a good reminder that so much of alcohol’s power lies in what we believe it does. And so often, what we believe to be true becomes true.

“My drinking doesn’t affect anyone else.”

New research shows that children are far more aware of their parents alcohol consumption than we might like to think. The Institute of Alcohol Studies says even moderate parental drinking can upset children and cause them anxiety.

This report backs up a lot of the anecdotal feedback I’ve had from the mums on my stop drinking course. Even very young children, who don’t really ‘get’ what wine is, seem quick to pick up on the change in your energy levels (and your willingness to read a bedtime story).

“If you’re careful, you can outsmart a hangover.”

As we head towards the end of the year – and into party season – be prepared to see a lot of articles about hangover cures. You know the ones I mean – they promise that you’ll be able to party till dawn AND look flawless in the office. All you need to do is guzzle green juice, use expensive foundation and meditate in a special way…

It’s total nonsense of course. These articles are selling a lifestyle that doesn’t really exist; you cannot consume glass after glass of toxic poison and not feel it the next day! NHS advice says, “The best way to avoid a hangover is not to drink.”