Why Can’t I Cut Down Or Control My Drinking? 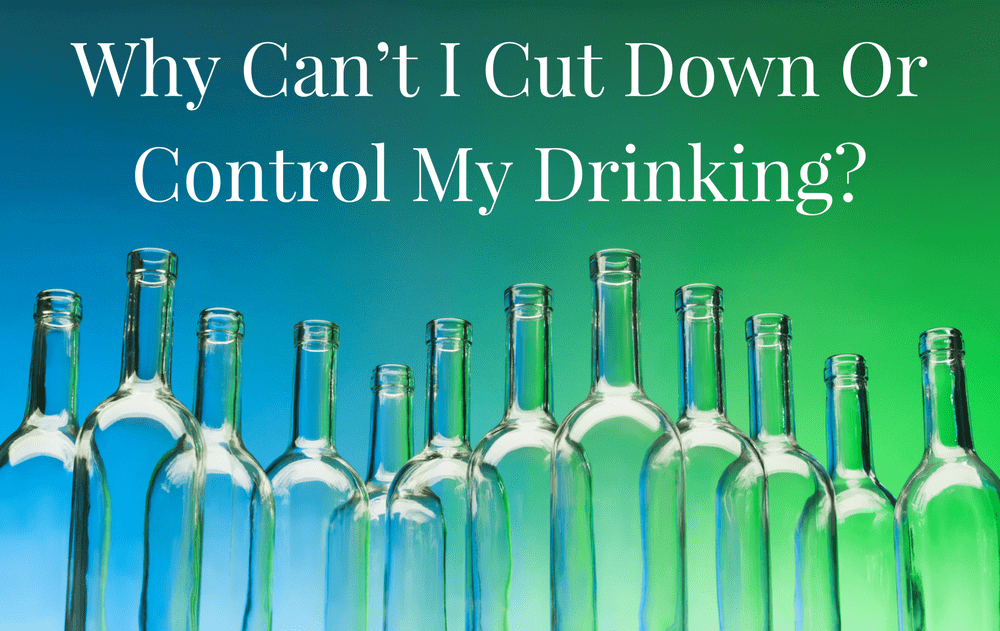 At the height of my drinking career, I’d often wonder:

Why don’t I have an off switch?
Why can’t I control my drinking?
Why can other people have 1 or 2 drinks and then stop?

Back then, my inability to control my drinking felt like such a personal failing – a weakness.

Nowadays, things are different. Not only am I five years sober, but my views on all this have changed too.

If you’ve been beating yourself up about your inability to moderate, this blog is for you.

Why can’t I stop at just one drink?

A better question to ask is, why should you be able to stop at one? After all, alcohol is a powerful, mind-altering, addictive drug. It zaps your willpower and changes the way you feel. It makes you lose control.

When it comes to other drugs, we seem to understand this. We don’t shame smokers for becoming addicted to nicotine – we just accept the fact that it happens. We should be doing the same with booze.

You are not weak or broken because you can’t ‘control’ alcohol. Becoming addicted to booze is a completely normal (and predictable) side effect of consuming an addictive substance.

But some people DO seem able to control their intake!

Moderate drinkers do not have superhero powers or huge reserves of willpower. Instead, their drinking is likely to be controlled by other factors.

For example, some people don’t like feeling drunk or out of control. They actively avoid that sensation rather than chase it. For others, drinking just isn’t their poison – it’s not a coping mechanism for them. When they’re feeling down, they don’t turn to booze. Perhaps they have healthy coping mechanisms in place, or maybe they overeat or gamble or do something else instead.

Other drinkers will be seriously restricted by finances, responsibilities or the influence of those around them.

So is moderation something I should work towards?

Yes and no. If you’re honestly just beginning to evaluate your relationship with alcohol, cutting down is a logical place to start. But the chances are that if you’re reading a blog like this, you’ve already had a good go at moderating. (I bet you’ve tried a few things on this list.)

There’s no secret to moderation. There’s no magic trick that you haven’t discovered yet. If moderation was something that worked for you – on a consistent basis – and made you feel good, you would know that by now.

Here’s the big problem with moderation.

Cutting down, rather than cutting out, stops you from exploring sobriety properly. It reinforces the idea that you cannot truly enjoy life without booze.

Moderation makes a drug like alcohol seem extra special. And because you’re trying to be ‘good’, you’re never satisfied. There’s never quite enough and all your focus is on alcohol (the thing you’re trying not to have so much of).

Plus, moderating requires a lot of effort. It ain’t for wimps. You’re constantly having to make decisions. What will you drink? When? Where? How much? It’s much harder than just making one wholehearted, committed decision not to drink.

If moderation is off the table – but I don’t want to quit forever – what should I do instead?

It’s normal not to be ready to quit ‘forever’ as that is a pretty overwhelming idea. But what about an experiment instead? You only get to find out what sobriety is really all about when you do it and keep doing it… so why not take a break from booze?

Commit to going alcohol-free for a month or two. Give sobriety 100% (no ifs, no buts) whilst feeling safe in the knowledge that at a set point in time, you will stop, review and decide what happens next.

Maybe you’ll go back to drinking. Maybe you won’t. Maybe you’ll surprise yourself and fall in love with this awesome alcohol-free lifestyle. (I talked more about taking a break from booze in this video.)

The days of me waking up and feeling sorry for myself are long gone, thankfully. I never feel as if I’m missing out by not drinking – I just feel relieved that I don’t have to drink anymore.

I don’t know anyone who’s struggled with alcohol and then morphed into a happy, carefree, moderate drinker.

However, I know a LOT of sober women who are living fulfilling lives after letting go of booze. They got their happiness back. And their freedom. Isn’t that what we all want?

How many times have you woken up to discover that

Some cheery tulips to brighten up a grey day🌷I

This is by far the most common piece of feedback I

Some people say that quitting drinking feels a bit

Load More…
This error message is only visible to WordPress admins