Before you declare yourself a failure, read this first. 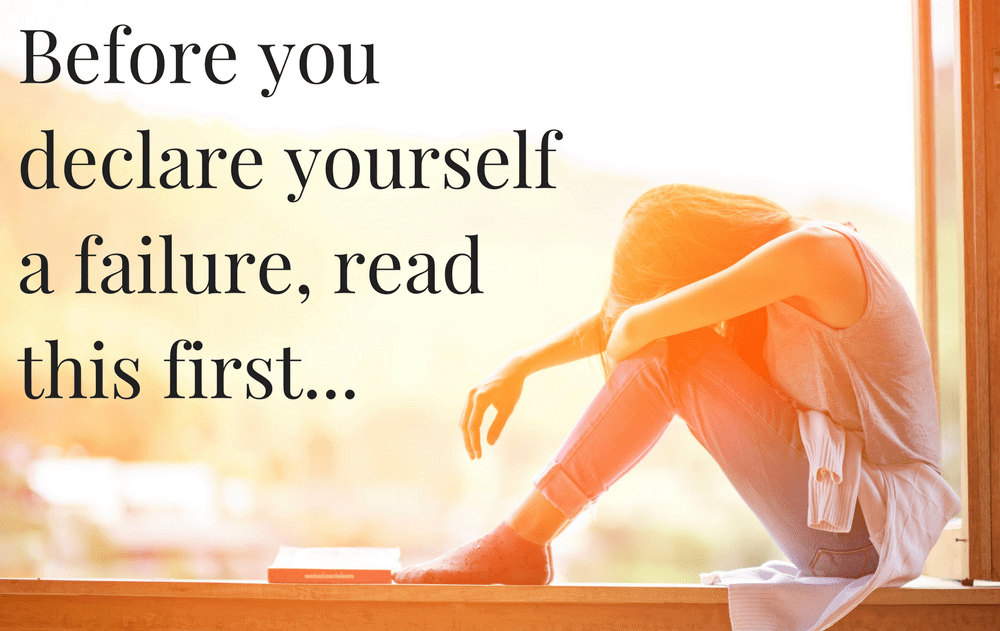 Has trying to stop drinking ever made you feel like a bit of a failure?
.

Maybe you’ve promised you’ll quit more times than you can count.
Maybe you do great during the week, but you slip up on Friday nights.
Maybe you’re so scared of not being able to quit, you can’t bring yourself to get started.

But before you write yourself off as a failure and decide that alcohol-free living is ‘impossible’, there are two important things that you need to check first…

Are you doing the same thing over and over?

This is a mistake a LOT of people make. Every time they decide to quit, they promise to stop drinking… but that’s about it. They don’t do anything else. They don’t think about why they drink. They don’t have a plan for what they’ll do when cravings strike. They don’t set up a support system or find a community of likeminded people.

Instead, they just keep trying to battle through on willpower alone!

Think about it: if you were training for a big race, would you make up a running plan as you went along? It’s unlikely. And if you were struggling, would you keep on doing the same thing, over and over? Or would you mix things up and seek out help, advice and support?

I know that ‘failing’ hurts and it’s tempting to just block it all out and forget about it.

But that approach means you miss out on a valuable opportunity to really observe what’s working and what isn’t. Analyse what triggered you to drink – if that same scenario comes up again, how would you handle it differently? How could you plan for it?

A big part of successful sobriety is building a brilliant sober toolbox.

This is something I talk to my students about all the time. (Sober tools are alternative coping mechanisms that help you deal with the ups and downs of life without booze.) Everyone’s different and sometimes it takes a little while to find the tools that really work for you – that’s why you’ve got to keep going and keep experimenting.
.

“The ‘I’ve tried everything’ story ensures failure. You must create an empowering story that recognizes that everyone has failed a lot but successful people have found a way to rebound until they succeed.”
Tony Robbins

.
Be proactive and plan ahead.

For example, if you haven’t really talked to your partner about your drinking – and they keep expecting you to drink with them – now’s a good time to manage expectations and talk about what you’re doing. (You don’t need to ask for their approval, just their support.)

And if there’s a part of your day that keeps tripping you up, now’s the time to troubleshoot it.

What can you do to make things easier or handle life a bit differently? I’ve coached stay at home mums, chief executives, women juggling busy jobs and family life… it doesn’t matter what your circumstances are, there is always a way to do this.

Are you keeping a sense of perspective?

What do Steve Jobs, JK Rowling, Richard Branson and Oprah Winfrey all have in common? Well, they all had spectacular failings in the past. They had to overcome significant setbacks and force themselves to keep going, even when the odds were stacked against them.

My point is, anyone who is successful and who accomplishes a lot in life is bound to “fail” along the way.

Whenever we try and do something great (and sobriety truly is GREAT) then we’re bound to hit resistance, setbacks and challenges. That’s just how it goes.
.

“Failure isn’t something to be embarrassed about; it’s just proof that you’re pushing your limits, trying new things, daring to innovate.”
Gavin Newsom

.
Failure simply means you’re taking action and putting yourself out there.

If we only ever did things that we knew we’d succeed at, then we wouldn’t get very far in life would we? We’d just stay the same. We’d stay in our comfort zone, never growing, never changing, never doing anything vaguely uncomfortable. Trust me, there are lots of people who quietly feel very unhappy about their drinking, but they never do anything about it. Be proud that you aren’t like that!

It takes courage and persistence to change an ingrained habit.

And yes – it can be scary and frustrating at times. But what’s the alternative? Your only other option is to carry on drinking and carry on feeling miserable.

Remember, success isn’t about doing things perfectly and without failure.

True success is about picking yourself back up after you fall and having the determination to try again. So: keep your setbacks in perspective. See them for what they really are: a lesson learned and a step forward on the path to success.