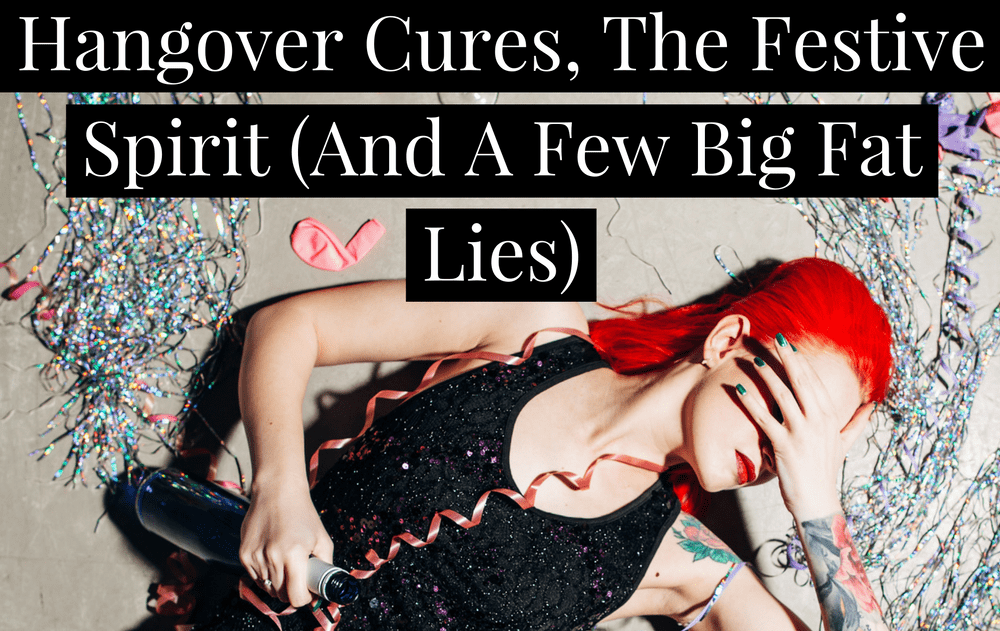 Christmas is just around the corner and we are officially in party season.

I’ve noticed some magazines also call this time of year ‘hangover season’, which would explain the sudden rush of articles with headlines like:

Even this month’s edition of Women’s Health magazine has a feature in it about ‘hangover elixirs’. These are juices that will – apparently – perk you up ‘when your liver and gag reflex require a little repair and restoration.’

(Interestingly, this is the same magazine that dedicates serious column inches to the benefits of detoxes, chemical-free beauty products and eating ‘clean and lean’.)

I find these ‘hangover cure’ articles problematic for several reasons.

Firstly, it’s wrong to imply that you can chug back as much as you like and outsmart a hangover. It really doesn’t matter what fancy juices you drink, or how expensive your make up is – if you’re hungover, you’re hungover. You’ll feel like crap (and probably look like it too).

Whilst there are things you can do to try and ease the pain and dehydration, ultimately you’ve consumed a toxic liquid – so you’re bound to feel awful. It’s misleading to imply anything else. As the NHS website says, “There are no cures for a hangover. The best way to avoid a hangover is not to drink.”

This kind of journalism glosses over the fact that alcohol is a toxin. And if you’re drinking so much that you feel ill, or blackout, or fall over, then you’re really damaging yourself.

These articles also imply that the best way – in fact, the only way – to celebrate Christmas is to get drunk. Really drunk.

If you’re going to party properly, then alcohol MUST be consumed, to excess. This is the bit I find particularly confusing.

For most of the year, it’s NOT ok to get really wasted. We frown on people who repeatedly drink too much, make a scene and can’t ‘stay in control’. Drunks are bad – you know that, right? And yet … on special occasions, it’s perfectly ok to drink shot after shot until you’re unable to remember what happened the night before. In fact, memory loss is a sign of a good night!

We have such a hypocritical, contradictory and confusing attitude towards alcohol, it’s no wonder people struggle to work out whether they have a problem.

We’re forever glossing over the truth about booze: the broken promises, the memory loss, the judgement and shame the morning after.

And I don’t know if you’ve noticed, but the pictures used to illustrate these kind of articles rarely show anyone who is genuinely drunk or hungover. The models are always sipping glamorous cocktails, looking confident and in control. Or ‘recovering’ by sleeping peacefully in bed. (No make up smeared all over the pillow for them.) It’s a far cry from how I looked when drunk, or the morning after.

I think it’s important to talk about this stuff, particularly at this time of year, when it’s so very easy to fall for the hype. It’s tempting to tell yourself that ‘everyone’ is drinking loads right now; that it’s the only way to have fun; that those hangover cures really do work… And that this time, it will be different.

So over the next few weeks, just remember … these articles are selling a lifestyle that doesn’t really exist.

It’s not possible to drink to excess and getaway with it.

Alcohol always catches up with you in the end. If you want to wake up feeling good, positive (and able to remember everything about the night before!) then sober is the way to go. Trust me. Sobriety rocks. Really, it does.