Lessons from 1000 days of sobriety 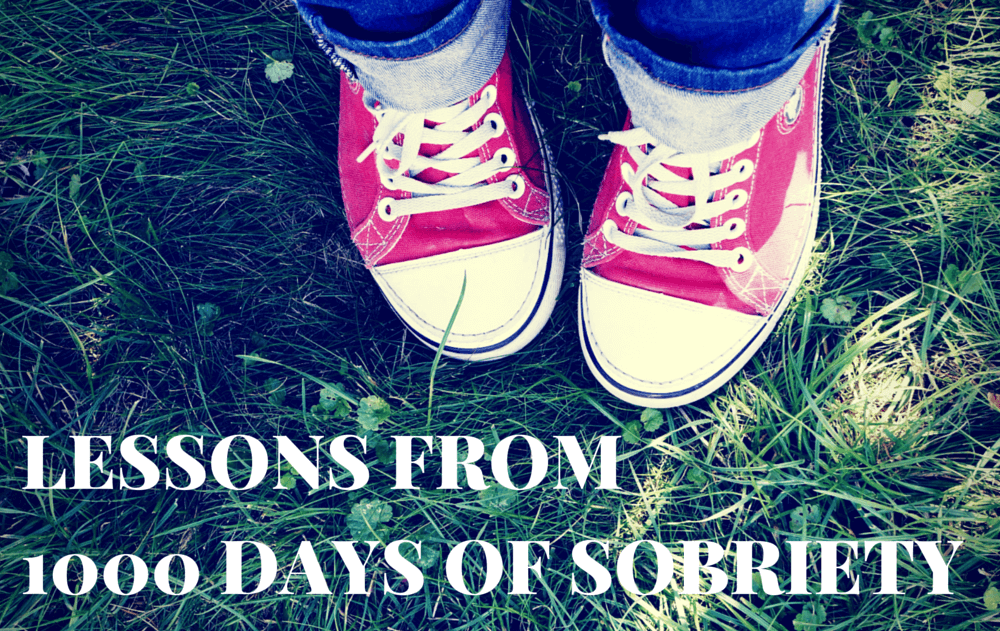 I only realised a few weeks ago that I was about to hit 1000 days sober. I have a little app on my phone that counts the days but I rarely check it now. So I got a bit of a surprise when I opened it, looked at my calendar, did some adding up on my fingers and realised the 1000 day mark was going to fall on New Year’s Day. What are the chances?! I’m convinced it’s a sign that this year is going to be a really, really good one.

I’ve been thinking about how much has changed for me since I stopped drinking. There’s so much – and all of it is good. If I knew back then what I do now, I’d have definitely stopped sooner. But I know how hard it is at the beginning, when your drinking is niggling at you and your gut feeling is that something isn’t right. And yet you still can’t quite get your head around the idea of not drinking again.

Perhaps you’ve promised yourself that you will make changes and it all starts today. Maybe you’re reading this through the fog of a New Year’s Eve hangover, trying to summon up the energy to follow through on your resolution. If that’s you, then I hope you go for it.

Here are a few things I’ve learnt during the last 1000 days.

Not drinking is the right decision. I thought I’d start with this one because at first I wasn’t sure it definitely was. As you know, sobriety is generally painted as a boring, prudish, punishment – something that only needs to be considered when all else has failed. Surely learning how to live a full and happy life without relying on a poisonous substance is a good thing? Yes, it’s hard at first but it gets easier. Of course it does. If it sobriety required full-time, herculean strength I for one would still be boozing. As it happens, these days drinking seems as alien to me as smoking or taking drugs. I have lost the sensation of ‘needing’ a drink.

The clearheaded, focused feeling of sobriety is addictive in itself. When I drank, I spent so much time simply treading water, going round in circles. I drifted from this idea to that, unsure of what I really wanted. Living free from fog and confusion day after day makes it so much easier to carve out a life you actually like.

All the things that bother you in early sobriety will go away. I spent a lot of time at the beginning wondering if people would notice, wondering what to tell friends … I even started panicking about what would happen if I ever got married. Never mind the fact that I wasn’t in a relationship – I was preoccupied with what I would do about the toast on my wedding day! In early sobriety, thinking long term is really scary so my advice is don’t do it. Just trust that everything will work itself out.

It’s easier when you get some help. Trying to get sober on your own is like attempting the Sunday crossword by yourself. You’ll struggle over clues that someone else will get straight away. So make it your mission to get out of your own head, soak up new information and seek out help. You are investing in yourself and your future. Keep experimenting. It’s not enough to say, ‘ok well this time I’m going to try harder’. If you keep doing the same thing, you’ll get the same results.

Being quietly rebellious is really fun. Drinking is what people do to fit in. It keeps you under the radar, one of the sheep, one of the gang. Early sobriety feels like wearing a neon sign on your head and I for one, didn’t like it to start with. Yet after a while your perspective changes and being different feels kind of cool. We live in a world where supermarkets sell booze right next to the bread and milk. Every advert for wine tells you it’ll make your life better. By choosing to live sober I am rebelling against those messages and that feels good.

We don’t need to drink in order to feel accepted and liked by others. Alcohol may appear to oil the wheels and turn you into a social butterfly but it’s never very authentic. It glosses over too much. We shouldn’t have to drink in order to stomach spending time with friends. I’d rather have the real deal any day.

All the things that you think drinking provides you with are already inside you. That’s the real secret.  But you don’t discover that until you take the booze away. You’ll also be rewarded with better skin, more energy, more money, quality sleep and a general sense of awesomeness. So hang on in there – it’s more than worth it.