Why You Don’t Need To Quit Drinking Forever 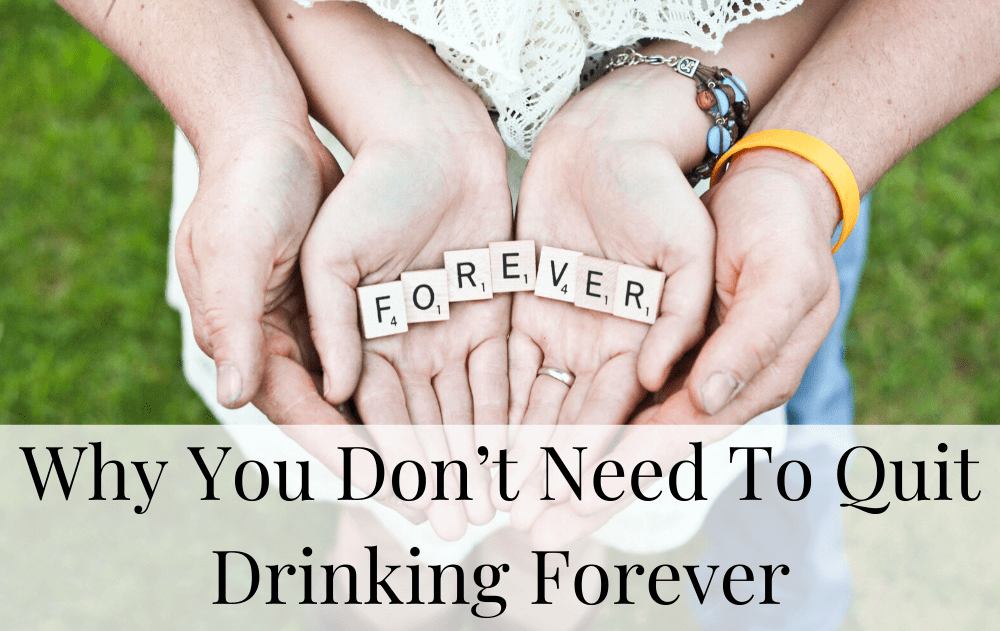 “I know I need to stop… but I don’t think I can quit drinking forever.”

I hear this a lot. And it doesn’t surprise me. I mean, ‘forever’ is a long time, right? It’s pretty hard to get your head around.

People often want to know whether it’s ok to feel like this. Is it a sign that they’re not ready? Should they wait until they feel more committed?

Rest assured, getting freaked out by the ‘forever’ word is totally normal!

How do you measure ‘forever’?

The first problem with the F-word is this: how will you know when you’ve achieved it? Quitting ‘forever’ means you’re committing to stay sober until you die. This means you’re never going to have the satisfaction of reaching your goal, because you won’t be around to know that you did it!

The F-word can make you feel deprived

Here’s a silly example. I don’t particularly like celery. I don’t hate it, but I feel pretty ‘meh’ about it. However, if you told me I could never, ever eat it again, I’d probably find a way to feel a bit deprived about that. I’d instinctively dig my heels in. Soon I’d be fantasising about how great celery is.

Even if you’re the one deciding that you’re going to quit drinking forever, committing to such a big goal can make you feel out of control. And once sobriety feels overwhelming and unachievable, you might not take any action at all.

Take a break instead

Here’s what I recommend: ditch the idea of needing to quit drinking forever, and take a proper break from booze instead. By this I mean stopping for more than a couple of days – it needs to be at least one month, but ideally three.

This gives you time to test drive sobriety properly and fully experience alcohol-free living, whilst feeling safe in the knowledge that it’s not permanent. At the end of your break you can review the situation and decide what you want to do next. You’re in control.

Why taking a break works

It takes time for a new habit to bed in (66 days, according to some). If you only ever quit for a few days here and there, you won’t learn anything. In fact, all you’re doing is making yourself repeat the hardest bit of sobriety again and again.

The author Clare Pooley has a great explanation of this concept here. If you want to get to the sunshine and fluffy bunnies, you must give sobriety a fair chance and stick with it long enough to reach the benefits – hence my suggestion of a 3 month break.

Do your sober homework

Be proactive during your break and educate yourself about alcohol and how it works. For example, you’ll want to get clear on why you’ve been drinking, and give yourself time to find some sober tools. (These are alternative coping mechanisms, to help you deal with the ups and downs of life, sober.)

Doing this stuff takes a little while – it’s very different to white-knuckling things and hoping for the best. So give yourself the time and space to make a proper go of it. (I was on the Euphoric Alcohol-Free podcast talking about the importance of sober homework, if you want to check that out here.)

What happens at the end of your break?

Ah… the million dollar question. What next? Well – it’s completely up to you. Maybe you go back to drinking. Or maybe you don’t. To be honest, you can’t lose either way. Even if you start drinking again and regret your decision, you will still have learnt so much.

I have an online stop drinking course called Getting Unstuck. What most of my students do is finish the class and then set another goal. They might commit to another six weeks, or they might be thinking months ahead. Everyone’s different.

Once they’ve reached their second goal, they’ll set another. And maybe another. They’ll keep moving forward, goal by goal, until they reach a point where their sobriety isn’t even up for discussion – it’s just what they do. It’s become a way of life they love.

One break could lead to so much

In 2013 I took a 100 day break, not knowing what would happen at the end. Today I’m six and a half years sober! Quitting drinking is undoubtedly one of the best things I’ve ever done for myself. However, I still haven’t said I’m going to quit drinking forever.

Just to be clear: you couldn’t pay me enough to drink alcohol. I don’t have any cravings or desire for it. I can’t picture any situation in which I’d want to drink again. And yet, for all the reasons I explained earlier, I still think ‘forever’ is a meaningless and hard-to-measure concept.

So that’s why I don’t like to use the F word. Unless you find it motivating and useful, you don’t need to use it either.