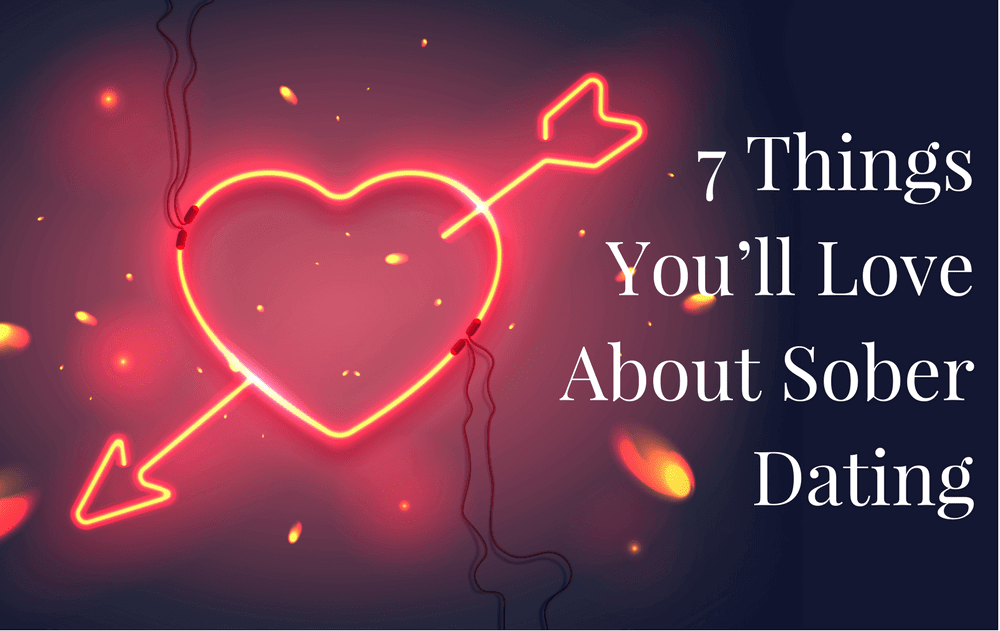 Valentine’s Day is fast approaching and it got me thinking about sobriety and relationships.

Whether it’s date night with your partner or a first date with someone new, the idea of doing that stuff sober can feel a bit intimidating to start with. But please – don’t let nerves put you off.

Over the years, I’ve carried out a fair bit of research in this area (a tough job, but someone had to do it) and I’m happy to share my findings with you: sober dates rock.

Whether you’re navigating the online dating world or sharing a romantic meal with a long term partner, you’ll have a MUCH better time alcohol-free. Here’s why:

1. You’ll have a better sense of connection

The idea that alcohol helps people to bond is a big old myth. Booze numbs the brain’s ability to process information from its senses, making it hard to be truly present and connected to someone else.

Next time you’re out, keep an eye on the couples who’re drinking a lot. Eavesdrop on the drunken conversations. They tend to involve a lot of talk, but very little connection or engagement. Alcohol makes drinkers more likely to withdraw into their own world.

Look out for the fights too. If alcohol was the magic, romantic joy juice it’s marketed as, why would so many couples get into drunken arguments?

If you’re only interested in doing things that involve drinking, it really limits what you can do. You’re pretty much stuck with the age old drinks-in-the-pub routine or a boozy restaurant meal. When you’re not focused on drinking, you can do so much more.

Whether you’re going out with someone new or someone you’ve been with for years, dates are really just about spending quality time with that person. If you can have fun without alcohol, you know you’re on the right track.

3. You’ll be more interesting (and so will your date)

There is nothing more tedious than someone who’s drunk and repetitive but thinks they’re hot and hilarious. We’ve probably all been that person at some point and it is AWKWARD!

Interesting people tend to be the ones asking questions, listening to the person they’re with and paying attention to what’s being said. They’re engaged, present and connected.

Think of it this way – if you’re with someone you genuinely like, you shouldn’t need to consume a mind-altering drug in order to tolerate their company.

4. You’ll have fewer facepalm moments the morning after

You know that sickly feeling when you wake up and remember what you said or did the night before? That rarely happens when you’re sober.

The chances of you picking a stupid fight – or doing something you hate yourself for the next day – all drop significantly when you’re in full control of yourself.

There’s nothing like coming home and knowing that you genuinely had a good time, that you were yourself and you weren’t trying to chemically alter the situation in any way. Experiences like that make you feel really good about yourself.

If you’re dating someone new, there might be awkward moments, but so what? Dating is awkward, whether you’re sober or not.

Alcohol numbs your feelings, screws up your sexual function and doesn’t exactly help your coordination either!

And seriously – if you’re dating, doing it sober means you’re far less likely to have an encounter you’ll later regret.

7. You can weed out the weirdos faster

When you’re alcohol-free, you can tell if there’s a real spark there. It’s much harder to make judgements about people when you’re both being altered by a powerful drug.

~ It’s up to you when you mention that you’re not drinking. Some people believe you should ‘warn’ your date but I don’t bother. Since when did we need to warn people that we don’t take certain drugs? The fact that I don’t drink isn’t very important or interesting information.

~ If you’re anxious to avoid the ‘oh you’re not drinking?’ conversation then a daytime coffee date or non-drinking activity is ideal.

~ If your sobriety does come up, BE COOL. Don’t ask me how I know this, but saying stuff like “Don’t worry, I’m still really fun!” is not a good idea. Actions speak louder than words, so just show up and be your amazing, interesting self.

~ If someone has a problem with your sobriety, wave them goodbye and thank your lucky stars there are more open-minded fish in the sea. Obviously, you should never apologise for not drinking, in the same way that you wouldn’t apologise for choosing not to smoke, sniff glue or stick needles in your eyes.

~ Keep things short. Sober or not, I think all first dates should be short. It takes the pressure off.

~ Remember that it’s normal to feel nervous. If things are going well then you’ll start to relax and have fun. That will happen no matter what’s in your glass.

~ Don’t be paranoid. Just because someone says ‘lets go for drinks’ it doesn’t mean they want to get crazy drunk. Even I still suggest ‘meeting for drinks’ because I like bars, I like people and I really like alcohol-free cocktails.

Let this Eleanor Roosevelt quote become your mantra: “You must do the thing you think you cannot do.”

If you’ve read through this and thought ‘I can’t do that!’ then pay attention. It might just be a sign you need to do this… and what’ve you got to lose?