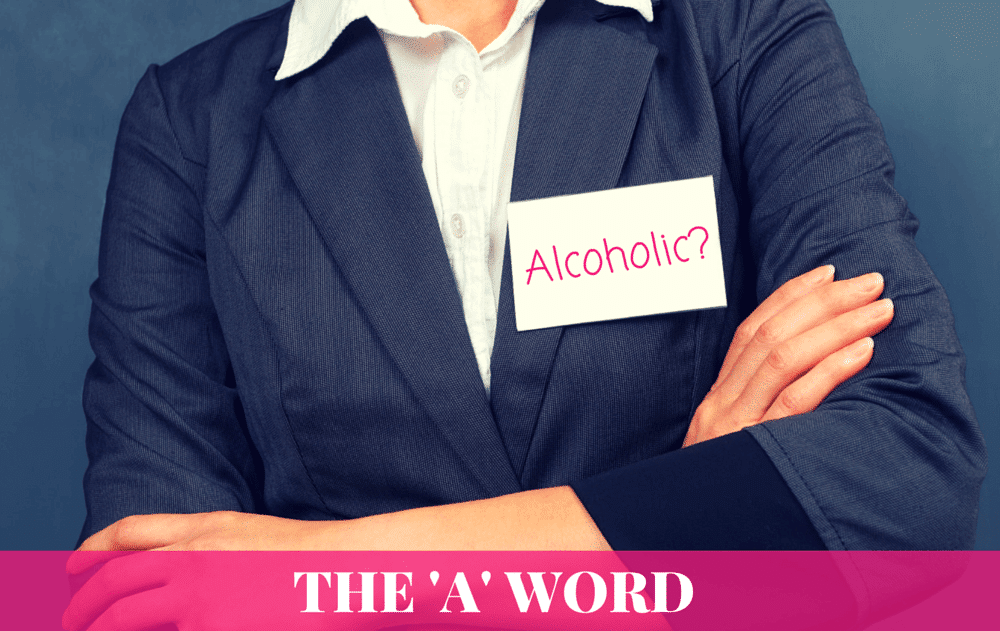 For me and many other drinkers I know, the thing that stopped us from seriously considering whether our drinking was problematic was the simple fact that we didn’t want to be “one of them”. You know, an alcoholic. In fact, we spent a lot of time trying to prove to ourselves that we were anything but “one of them”.

I think the idea that we need to identify as an alcoholic stems from 12 step groups like AA, where people introduce themselves with the words “My name is…. and I’m an alcoholic”. Not only that, but once you become an alcoholic, you are considered to be one for the rest of your life, even if you get sober.

There is something to be said for being forced to acknowledge a problem and some people find relief in this label. But for many others – myself included – the A word feels like a huge barrier to getting help. ‘Alcoholic’ is an intensely negative, loaded term, associated with drunks, losers and addicts. Surely, by holding on to this label, we’re saying “this is who we are. We will always struggle. We will always be this way.”

I think labels can be dangerous. They create confusion. They convince some of us that our drinking isn’t bad enough. I never called myself an alcoholic. I was confused about what the term really meant. I was pretty convinced there was some special test you had to pass first. In the UK, alcohol is so ingrained in our culture that stopping drinking is inconceivable to many. It’s a last resort – something only ‘proper’ alcoholics need to do.

Now, after some two and a half years of sobriety, I know a lot more about alcoholism than I ever did before. But do I consider myself an alcoholic? No.

Let me explain my thinking. Initially, I chose to live alcohol free because it seemed like the solution to a problem. I wasn’t thrilled at the idea, but I was drinking too much and I couldn’t moderate, so stopping altogether seemed easiest. But nowadays living alcohol free has morphed into being my choice. I don’t feel that I am missing out by not drinking. In fact I was missing out when I was drinking. I want a happy, healthy lifestyle for myself and drinking would destroy all of that. I see no benefits to drinking, so I feel very removed from the language of disease, struggle and ‘one day at a time’. The idea that I might be threatened by temptation for the rest of my days is totally bizarre.

I know what you’re wondering. What if I had one glass of wine – would I go back on the booze and revert back to how I used to be? Maybe. Perhaps. I’d be consuming a very addictive, mind altering substance so it’s quite likely that would happen. But the key thing is that I have no intention of finding out, because I have no interest in drinking again. It’s a bit like asking if I would become a nicotine addict if I started having a couple of cigarettes here and there. That might happen – but I don’t plan on finding out.

Resolving an alcohol problem isn’t easy. It took a lot of soul searching and hard work to figure out why I drank and to change the way I thought about booze. But now that hard work is over, I feel that I have been let in on a little secret – that life without wine can be really great, if not better than a life with it. I feel as though I am reaping the rewards of living an alcohol free life. In my mind, that’s far healthier than tattooing ‘alcoholic’ on my forehead and worrying about the demon drink for the rest of my days.