The art of being a sober rebel 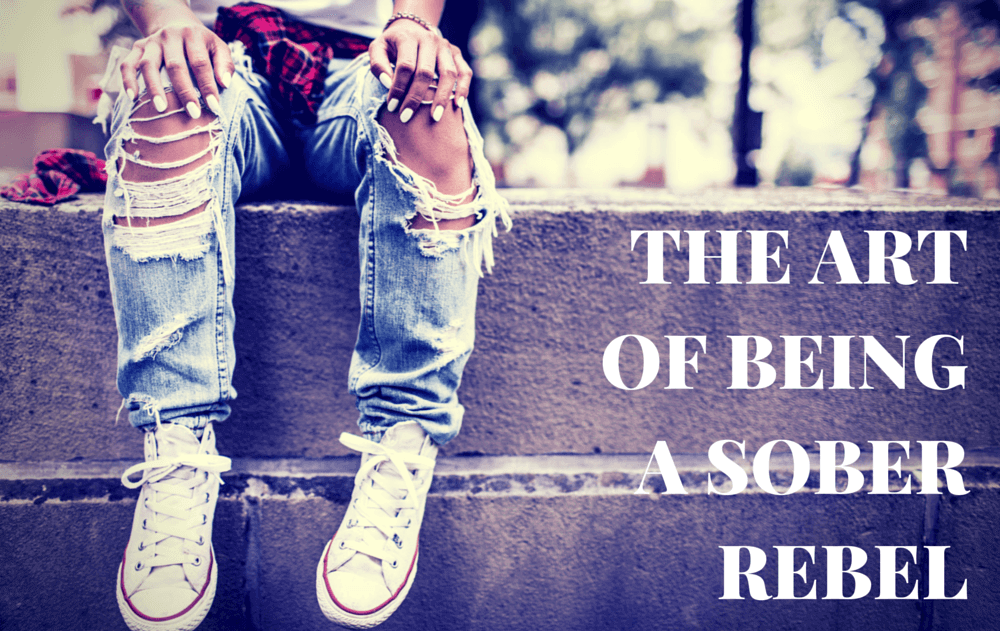 I was on the train home on Friday, when a group of teenage boys sat down near me. They were trying to work out which one of them was most likely to get served, if they bought some beers from the local supermarket. I stole a couple of glances at the different members of the group. They clearly weren’t 18. I’d guess they were 15, maybe 16 at most. I reckoned they were far too baby-faced to get away with it. They’d have been better off trying to get someone else to buy the booze for them. Not that I said that, of course.

It was funny listening to them talk about the prospect of drinking. They were playing it down and trying to be cool about it but I could see how excited they were. I remember feeling exactly the same way. As a teenager I was 100% geek most of the time. Drinking gave me a chance to be fun, glamorous and oh so cool. It meant breaking the rules, being daring and taking a risk. It was an act of rebellion.

As I eavesdropped on their conversation, it occurred to me that drinking is not really that rebellious at all. In fact, when you think about it, drinking is quite the opposite. It’s all about conforming to the norm. It’s about following the crowd and trying to fit in.

If those boys ever did manage to get hold of something to drink, I guarantee you half of them won’t have really enjoyed it. It might be the strange taste, or the weird light-headed feeling that puts them off. But they’ll keep quiet about that. They’ll persevere with it because it’s cool and glamorous.

One generation teaches another that this is how you should act. You have to push on through that initial resistance and acquire a taste for booze, because drinking is what proper grown ups do. It’s the best way of dealing with unpleasant emotions. It’s how adults function. We’re told that drinking earns you the appreciation of your peers and helps you fit in. And don’t you dare think about not drinking because only boring, uptight people would consider that an option.

It’s all such nonsense. Being a rebel is not about doing the same as everyone else or drinking till you’re rendered unconscious. It’s about being an individual and refusing to follow a crowd that forces you to think the same way they do.

It strikes me that sobriety is one of the most rebellious things you can do.

It takes courage to defy the social expectations outlined above. It’s scary to move out of your comfort zone like that, to go against the grain and risk not fitting in. It takes bravery to carve your own path and be yourself without any kind of numbing shield.

When I first stopped drinking, I went to great lengths to hide the fact that I was teetotal. I was forever ‘on a detox’ or ‘training for a race’. I’d choose non alcoholic drinks that looked like they could pass for booze. Whenever someone did notice that I wasn’t drinking, I’d find myself blurting out things like, “Don’t worry! I’m still really, really FUN!” I may as well have been saying, “Don’t worry! I’ll still fit in!”

Nowadays I’m not so bothered. I can see it’s the social conditioning around alcohol that’s the real problem. It traps people. It makes them fear that they will be missing out, unless they follow the crowd. Increasingly, I think that stopping drinking is less about alcohol itself and more about recognising where you’ve been trained to think and behave in a certain way.

Isn’t it strange that we’ve got to a point where we can see cigarettes for what they really are – they’re not considered sexy or cool anymore – and yet we’re still so hung up on booze? I wish I could have conveyed all this to the boys on the train, but I am laughing at the mere thought of doing so. I’m sure it would have come across as very patronising…

If you’re waiting for the 'perfect moment' to qu

I assume you are tired of the moderation game or t