Why can’t I just have one? 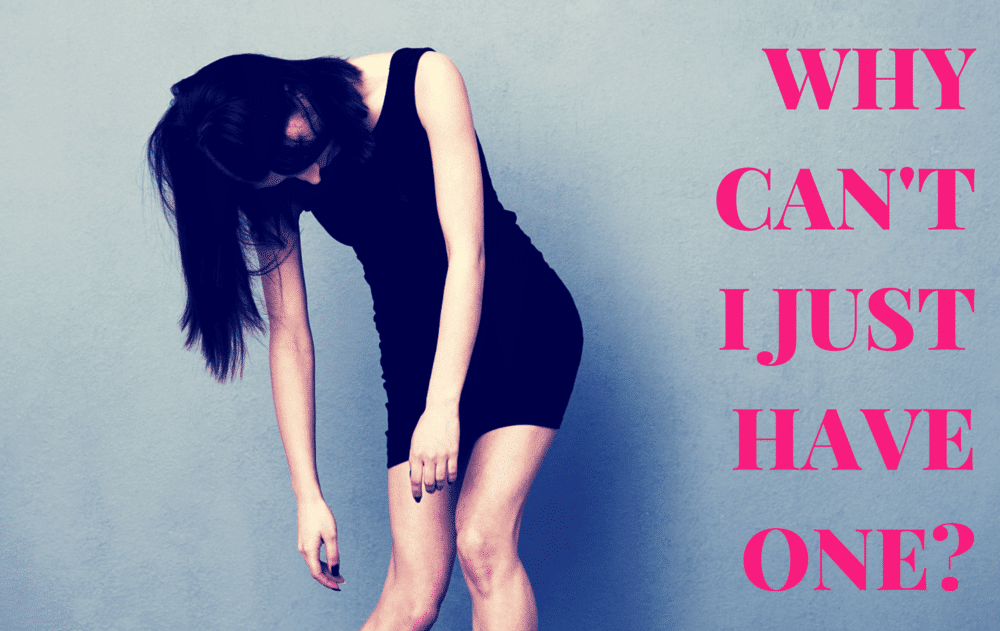 How is it that one person can enjoy a couple of beers or a glass of wine and then go on with their life, whilst for others, it becomes a problem? I think this is something we’ve all wondered at times. Thoughts like ‘maybe I don’t really need to stop’ ride shotgun with ‘maybe I could just cut down’ and ‘well other people manage to have just one or two’.

I find that people who don’t have a problem with alcohol are often baffled as to why some of us experience a difficult relationship with booze whilst they seem to be able to take it or leave it. There are a number of different opinions out there with regards to this, ranging from the ‘alcoholism as a disease’ model, to the likes of Allen Carr/Jason Vale who believe that anyone who regularly drinks alcohol is an alcohol addict – they just don’t know it yet.

I agree that anyone who drinks regularly is dependent on alcohol to some extent. You only need to scroll through Facebook to see how many ‘take it or leave it’ drinkers are counting down to ‘wine o’clock’. Now, they might only have one glass, but if they don’t get it, they feel disappointed and deprived in some way. These are the same people who feel very proud of themselves when they take a month off booze. As Jason Vale says, if someone boasted to you that they’d stopped eating bananas for a month would you think – wow that’s someone in control of their bananas? Or would you think: gosh, I didn’t know they had a problem with bananas?

Whatever you think of that argument, there’s no denying that there is something that stops ‘take it or leave it’ drinkers from picking up a second or third glass. Of course, some people just don’t like the feeling of being drunk. Others are influenced by those around them. Our behaviour often reflects the people we spend time with – be it friends and family or the places we go and the people we meet.

Then there are the restrictions that our own lives place upon us. Drinking has consequences, and maintaining family and work commitments play a big role in regulating people’s alcohol consumption. Money is also an important factor as drinking is an expensive hobby. Health is another restriction.

All the factors above definitely play a part, often without people even realising. But I don’t think it’s as simple as the restrictions of life, money and health. After all, you and I are subject to most of those same limitations and yet we chose to ignore them.

Increasingly, I think it’s all down to this: it’s about how we handle our emotions. Isn’t that what addiction comes down to, in the end? It’s a way of escaping some kind of pain or unpleasant feeling. It doesn’t matter whether you use food, or alcohol or sex or drugs – you’re still trying to escape, avoid and turn off.

Now I’m not saying that every ‘take it or leave it’ drinker is some kind of emotional ninja, totally at one with ‘feeling their feelings’ and sitting with uncomfortable emotions. That might be the case. Perhaps they meditate on their troubles. Or maybe they’ve got their own food or sex or computer game addiction. Whatever, it just happens that alcohol is not their tool of choice.

Excessive drinking has nothing to do with willpower or being weak or greedy. It is just a symptom of what’s going on underneath. And don’t forget, alcohol is an addictive, mind altering drug. Just because society has normalised drinking, it doesn’t mean that our bodies have got any better at handling it. When you think about it, it’s kind of crazy that we assume we should be able to consume alcohol without getting addicted.