What do you mean, you’re NOT drinking?! 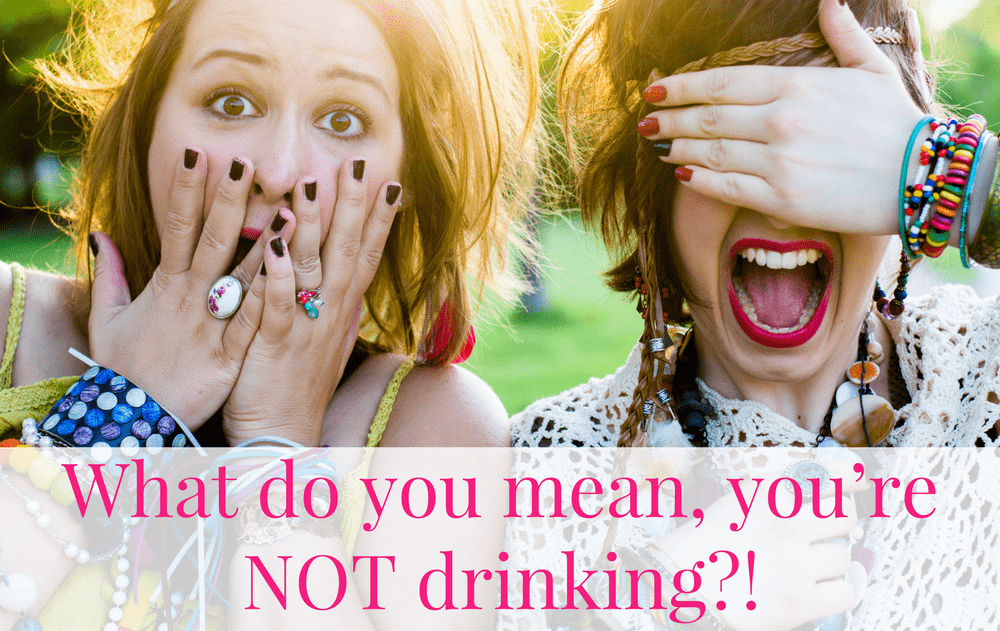 Picture the scene: it’s your best friend’s birthday and you’ve been dragged out for drinks. You’re hovering near the bar, trying to discreetly order something alcohol-free without anyone noticing.

Just as you start to think you’ve got away with it, someone leans over and says, “Is that … sparkling water? Why are you drinking THAT?”

Heads turn in your direction. People frown with confusion.

Are you ill, they ask? Has something happened? Why aren’t you drinking? Why, why, WHY? What possible reason could there be for actually choosing to socialise sober *shudder*?
.

The chances are you will have to deal with some version of this scenario, at some point.

But the good news is that with a little preparation, you can stop those ‘hope-the-ground-swallows-me-up’ moments from being such a big deal. You can close down the conversation and move on (without having to tell the whole bar about your drinking history).
.

.
It’s completely up to you what you do and don’t say.

Before we go any further, let’s take a moment to remember that it is no one else’s business whether you’re drinking or not! Other people might think they have some right to know, but they really don’t. You are in complete control here. You don’t owe anyone an explanation – not even your oldest drinking buddy. If you decided to cut out caffeine or gluten or meat, you wouldn’t seek their approval. This is exactly the same. You’re a grown up and you get to make your own decisions.

I think you’ll be surprised how often this happens. If you’ve been obsessing about your drinking for a while, it’s easy to assume that everyone else is also obsessed. But there are lots of people out there who really don’t care whether you drink or not – even some heavy drinkers have an ‘each to their own’ attitude. And some people will just be too wrapped up in themselves to even notice what you have in your glass.

Other people’s reactions have very little to do with you.

The way people respond says an awful lot about them, and their drinking, their prejudices and their fears. But it says so little about you. It’s not something you can control, so don’t waste your energy worrying about it.

When it comes to alcohol, most people are poorly educated. Their beliefs are based on stereotypes, myths and Facebook memes. People will say silly, clumsy things not because they’re trying to hurt you, but because they don’t know any better.

You won’t lose your real friends.

Yes, some people will be surprised by your decision and they may need a bit of time to adjust. But you’ll soon discover who your real friends are. Long term, they’re the ones who stick around and don’t care what’s in your glass, because they like you for who you really are.

How you feel about this WILL change.

Eventually, you won’t feel so bothered about this stuff. There will come a point where it feels natural and right to offer up a truthful explanation about why you’re no longer drinking. But the chances are that in early sobriety, you aren’t ready for that yet. So for now, just say whatever feels the most comfortable. Here are a few ideas.

For people who know you, and expect you to be drinking:

For rude and annoying people:

Whatever you decide to say…

Do it with confidence. Really own it. Don’t apologise for not drinking. Never, ever be apologetic. And remember, less is more. There’s no need to say too much.
.

Now I’d love to hear how you deal with this.

How do you handle people pressuring you to drink? Have you got any great responses or excuses that I’ve missed off the list? Perhaps there’s a smart one-liner that you use time and time again… Please let me know in the comments!