5 Things I Wish I’d Known Before I Quit Drinking 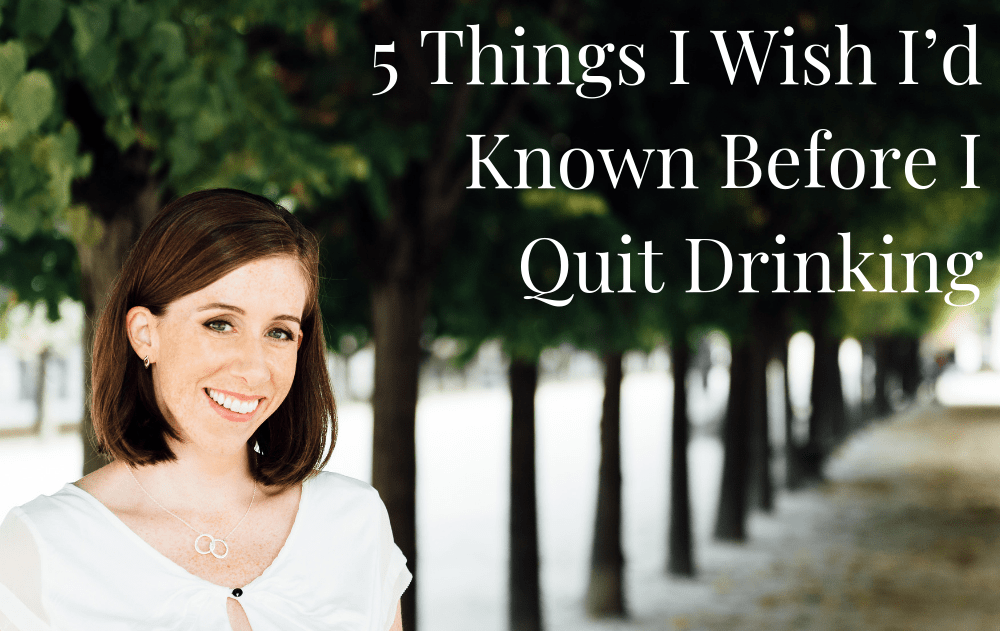 Ah, the beauty of hindsight! It makes everything look so different.

I quit drinking in 2013 and back then, I had so many misconceptions about alcohol-free living and what it was going to be like (and what it said about me).

There’s so much stuff I know now, that I wish I’d realised sooner… because it would’ve made things a lot easier.

Here are 5 things I wish I’d known before I quit drinking:

It’s not going to be hard work forever

Changing any habit requires effort in the early days, and sobriety is no different – it will take up a fair bit of energy and brain space to start with. However, it’s really important that you don’t let your mind run away with you. It isn’t always going to feel like this.

In the long term, alcohol free living is a doddle – it’s perfect for anyone who wants an easy life. Seriously, if it required ongoing willpower I’m sure I wouldn’t have stuck with it! Nowadays I think that continuing to drink is the harder choice. Hangovers aren’t for wimps, are they?

There’s more than one way to quit drinking

One of the reasons I set up The Sober School is because I never got on with AA. It wasn’t a good fit for me, for many reasons. However, the message I kept hearing from other people was that you ‘should’ go to AA. You ‘should’ work the 12 steps. And you ‘should’ declare yourself an alcoholic.

I’m now more than 6 years sober and I’m adamant about this: you don’t ‘have’ to do anything. If AA isn’t your cup of tea, go and find something that is. Sign up to an online course like mine. Read books. Listen to podcasts. Join a Facebook group. We’re all different, so experiment and see what works best for you.

It’s easier when you stop questioning the decision

Toing and froing over whether or not you should quit is exhausting. It grinds you down and keeps you stuck. It is so much easier to make one firm decision and give it 100%, rather than endlessly wondering if you’re doing the right thing.

But that doesn’t mean you need to be ready to quit ‘forever’. Instead I recommend taking a break from booze for a defined period, e.g. six weeks. That gives you something to focus on and work towards, whilst still feeling in control.

At the end of your break you can decide what to do next, having given yourself the chance to experience sobriety properly. Taking a complete break is much better than just stopping for a few days each week (I wrote more about that here).

Let me be clear here – if someone has a big problem with you not drinking, then the chances are they’re not a true friend. They’re just a disappointed drinking buddy. However, I bet there will be other people in your life who react strangely to your sobriety to begin with, but come good in the end.

A lot of people were surprised when I quit drinking, because I kept the worst of it fairly well hidden. When people are caught off guard, they’re more likely to make clumsy, insensitive comments, so don’t read too much into people’s initial reactions. Just give them a bit of time to adjust.

When I look back on my previous (unsuccessful) attempts at quitting, what really stands out is my mindset. I was convinced sobriety would be awful, so I constantly looked for evidence that proved that to be the case. I was annoyed I couldn’t control alcohol, and I felt weak and resentful.

By the time I quit drinking in 2013, my attitude had begun to shift. I’d realised just how much I was losing by continuing to drink. Sobriety was starting to feel less like ‘missing out’ and more like letting go of something that wasn’t working – a bit like breaking up with a bad ex.

So pay close attention to your mindset and inner beliefs. Treat sobriety as a lifestyle upgrade and be open to it being far better than you imagined. You have so much to gain, and so little to lose 🙂

If you’d like some help to stop drinking and create an alcohol-free life you love, click here for details of my online course.