Why You Can Stop Asking, “Am I An Alcoholic?” 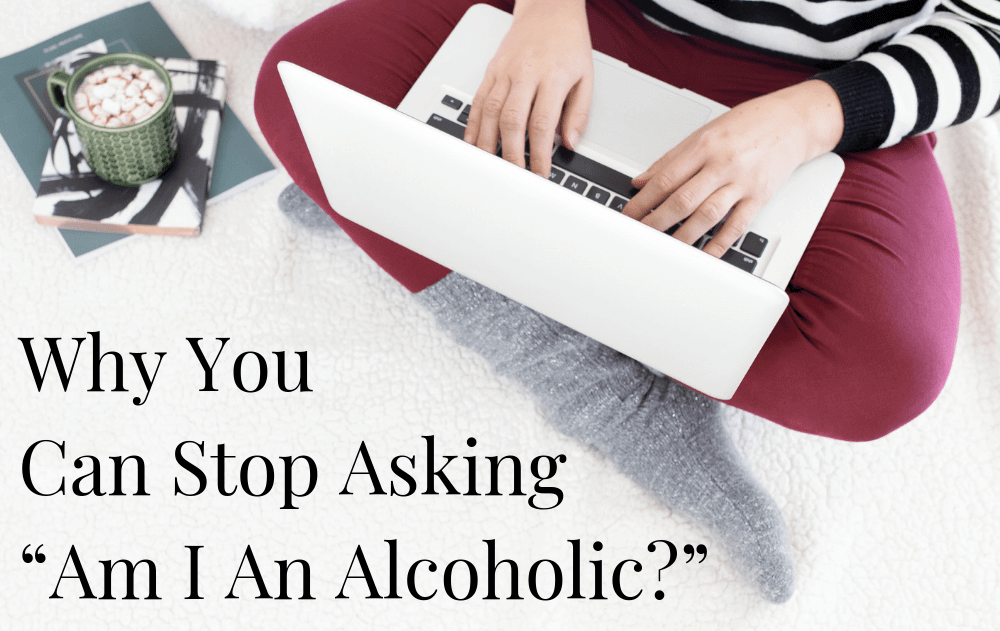 If you’re worried about your drinking, the chances are that at some point or another, you’ve wondered: “Am I an alcoholic?”

I remember googling this so many times and I never got a very clear or helpful answer.

I was pretty sure I wasn’t an alcoholic, but my drinking was causing problems.

So I felt stuck, because it seemed as if I didn’t (yet) have enough of a problem to qualify for the ‘must stop drinking club.’

Fast forward to today and an awful lot has changed. Not only am I six years sober, but I’ve realised that “Am I An Alcoholic?” isn’t the right question to ask. Here’s why:

What is an alcoholic?

What about those who are physically dependent on alcohol? Who have to drink every day and start the morning with a few shots? Again, it’s not so straightforward. This study found that only 10% of excessive drinkers are officially ‘alcohol dependent’.

Meanwhile, Professor David Nutt (the UK government’s former chief drugs adviser) says “We know a third of the people coming into the liver unit with alcohol-related liver damage do not meet the criteria for alcoholism.”

When we type “Am I an alcoholic?” into google, what we’re really looking for is a yes / no answer. But as the questionnaires show, it’s just not that straightforward. We can’t wrap this all up into one neat thing. Alcohol is messy and there are lots of grey areas.

“Am I an alcoholic?” makes it all about you, not alcohol

Can you imagine a smoker hunching over their laptop and fearfully typing “Am I a nicotineoholic?” into google? Can you imagine their angst as they wondered what was wrong with them – why couldn’t they control their intake of this addictive drug? No? It sounds crazy, right?

We accept that nicotine is addictive, so when people become addicted to it, we don’t blame them – we blame the drug. It’s just a no brainer. And yet with alcohol, we do the exact opposite. We shame people for having too much and not being ‘in control’.

In doing so, we’ve created a culture where it’s really hard to question your alcohol intake without being labelled. I think that’s a real shame, because we should be able to examine our relationship with alcohol in just the same way we do with sugar and gluten.

Behind the “Am I an alcoholic?” question lies another one: “Are things bad enough for me to need to do something about this?” And behind that question lies the belief that life without alcohol must be awful; so terrible that you’ll only put up with it as a last resort.

The truth is, we don’t need to be anywhere near rock bottom in order to decide we’re going to raise our standards and do something different. What if we let go of this idea that alcohol was somehow essential to a happy life, and saw it for what it really was instead: just a drug. Something you can choose to use, or choose to leave behind.

What to do instead

– Unless the ‘alcoholic’ label empowers you to change (which I know it does for some people) then feel free to ditch it. You are perfectly entitled to explore different lifestyle choices without needing to label yourself first.

– Observe your drinking. Keep a record of how alcohol is making you feel. It’s easy to minimise and rationalise the reality of your drinking when you’re keeping everything in your head and forgetting things. Writing it down makes this stuff real.

– Rather than asking if your drinking has become ‘bad enough’ for you to need to quit, focus on whether it’s good enough instead. All things considered, are the side effects worth it? Are you happy to keep putting up with things? I wrote more about this concept here.

– Find help. If you’re struggling, don’t go it alone. My online stop drinking course is for women who are curious about living life alcohol-free, but need a bit of help to make sobriety stick.