5 Annoying Things That Happen When You Quit Drinking 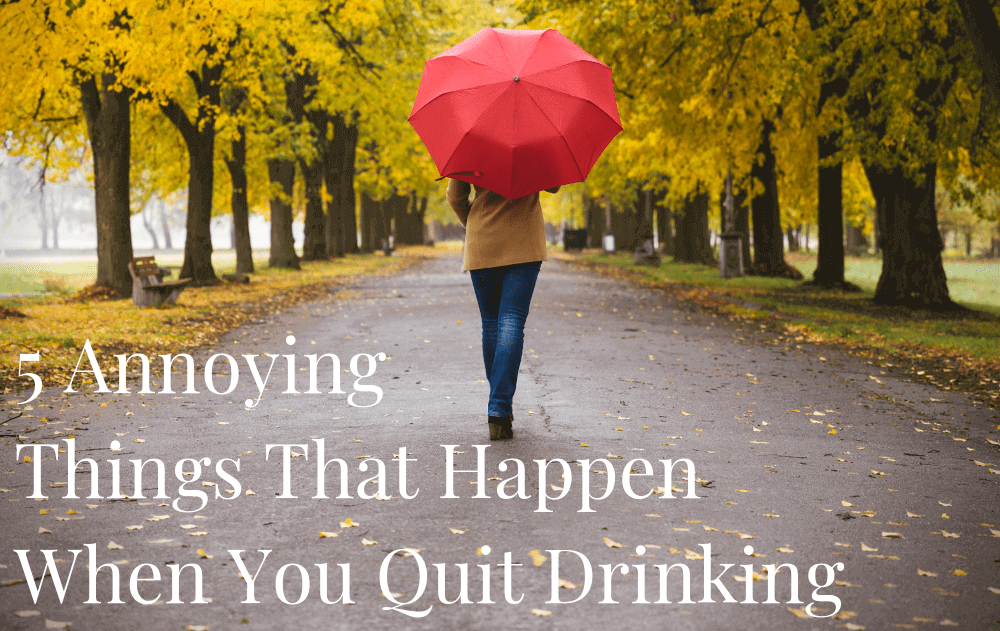 Deciding to quit drinking is one of the best things I’ve ever done for myself.

Initially, my plan was just to take a break for 100 days, but five and a half years later I’ve never looked back!

I decided to stick with sobriety because I felt so much happier and healthier without alcohol in my life.

Whilst sobriety has turned out to be (surprisingly) awesome, I can’t pretend it’s all been sunshine and rainbows.

There have been some challenging (and downright annoying!) things happen along the way. Today I want to explain how I’ve dealt with this stuff in case it helps you too:

1. Some of your friendships may change

Most drinkers surround themselves with other drinkers. Your decision to quit might make your old drinking buddies feel uncomfortable or self conscious about their habits.

I’ve realised that a true friend should want to spend time with you no matter what’s in your glass. If your relationship weakens when you stop drinking, it isn’t your sobriety that’s to blame – your AF lifestyle is simply shining a light on the weaknesses already there.

You do need to give people a chance to adapt and adjust, but if someone can’t get their head around you not drinking, don’t stress about it. Some relationships change over time. You will meet new friends – and the great thing is that in sobriety, they’ll get to know the real you.

2. People will say stupid things about you not drinking

I met a friend of a friend recently who noticed I don’t drink. “Why’s that then?” he asked. “It sounds really boring!”

It amazes me that people think it’s ok to say this stuff out loud! But other people’s reactions reveal everything about them and nothing about you. Personally, the way I respond depends on the mood I’m in – I wrote more about what you could say in this situation here.

The surprising benefit of dealing with this kind of crap is that a) it’s given me a slightly thicker skin and b) it’s made me far less judgemental of other people. Nowadays, I really think about how I treat other people who choose to live life differently to me.

3. Some people won’t want to date you

Just as some people will say stupid things about your sobriety, others might decide you’re not worth getting to know in the first place. Here’s an example of what I mean: 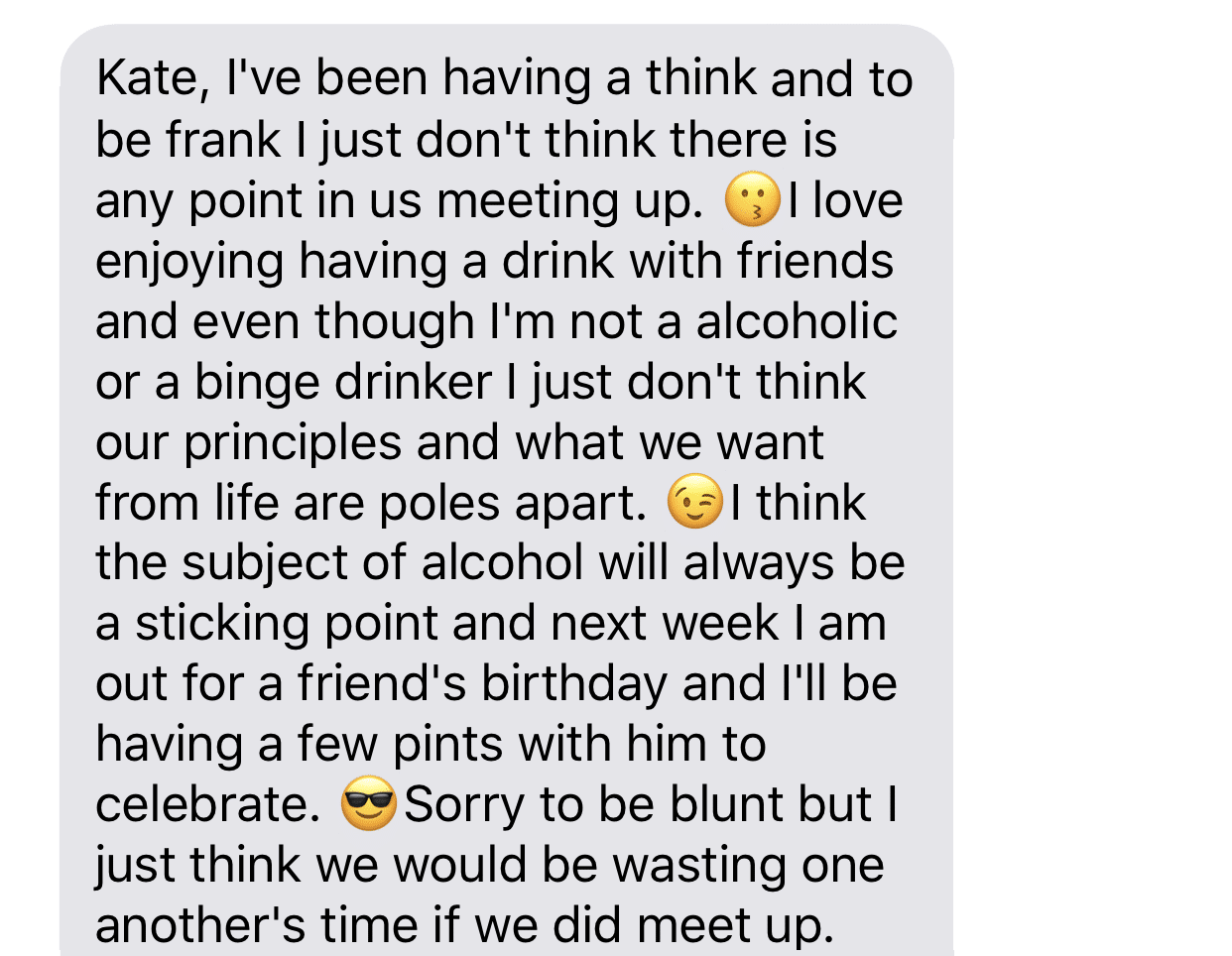 This kind of crappy text message might not feel like a gift, but it kind of is! This guy did me a massive favour by revealing his true colours so soon.

There ARE lots of men who don’t care whether you drink or not (and I know this because I’ve dated them). If someone is weird about your sobriety, then the chances are they’re pretty judgemental and narrow-minded about a lot of other stuff too.

Sobriety doesn’t make it harder to connect with people, start relationships or go on dates. Honestly, all it does is help you weed out the weirdos a bit faster.

After years of using alcohol to numb the edges of life and smooth over any awkwardness, sobriety can leave you feeling as if you’re walking around naked.

I think there’s something really amazing about just being yourself and not hiding behind a boozy comfort blanket. When you start showing up as you – and discover that people still like you! – it’s a massive confidence boost.

AF living forces you to go against the grain and be a bit different, and that sets you up for great things! I regularly hear from students of mine who’re doing really cool stuff in sobriety. I shared a few pictures here.

5. You wonder what you’re meant to drink

When I first quit drinking, I seemed to go to so many events where there were just two drink options: red or white. That was it!

I always remind myself that it is completely ridiculous for there not to be any AF options. What about people who’re driving or pregnant? Thinking about this helps keep things in perspective and stops me feeling like I’m being awkward when I ask for something else.

Where possible, be proactive and plan ahead. If you’re going to a party, take drinks with you that you know you like. If you’re heading out to a bar, see if you can find their drinks menu online so you know your options in advance.

I’m going to wrap this up by reminding you of something I wrote at the very start: stopping drinking is one of THE best things I’ve ever done.

Sobriety isn’t always easy but it IS always worth it.

In the grand scheme of things, the challenges outlined above are nothing compared to the horrors of drinking too much on a regular basis. And if you’re strong enough to deal with horrible hangovers, you can totally handle this stuff 🙂

Have you noticed that it’s never the ‘perfect

Does this sound like you?⁣ ⁣ “I don’t thin

The doors to my Getting Unstuck course are NOW OPE

Can you relate to this? ⁣ ⁣ It doesn’t take