10 Reasons To Take A Break From Booze This Summer 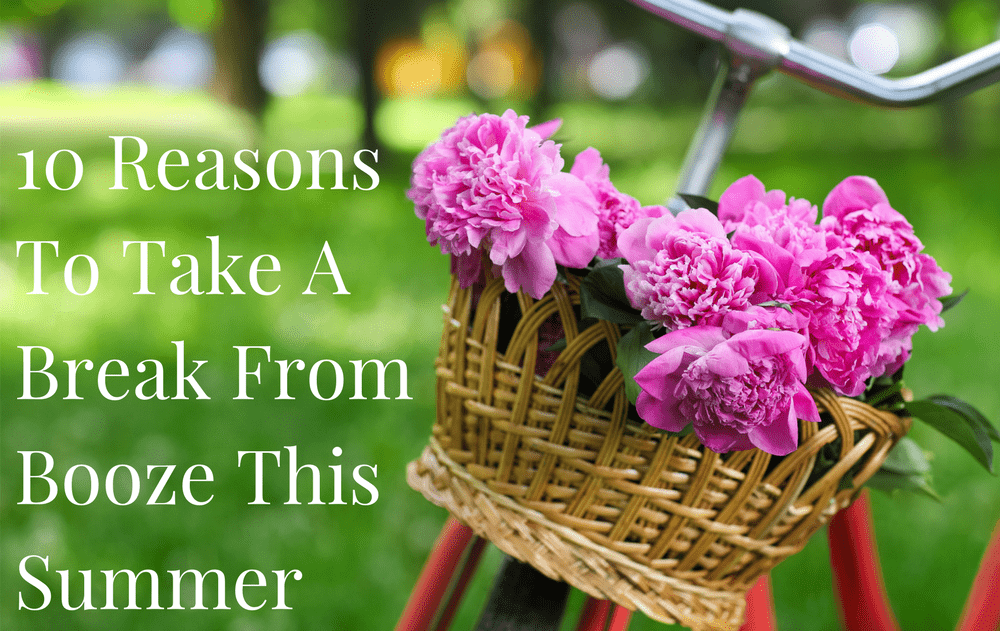 It’s been hot, hot, hot in my part of the world and it got me thinking what a brilliant time of year it is to take a break from booze.
.

Obviously alcohol-free living is amazing all year round, but there’s something about the summer months that makes hangovers especially awful and clear-headed sobriety extra wonderful.

I know summer brings its fair share of boozy events – from holidays and weddings, to beach trips and BBQs. But honestly, you can totally do all those things without alcohol (and I’m willing to bet you’ll have a better time NOT drinking.)

If you’ve been toying with the idea of having an alcohol-free summer, here are 10 reasons that might sway you in the right direction….

1. You’ll be a better parent and partner

Cutting out alcohol frees up your time immensely, so you can finally get round to those things you keep promising (but failing) to do. Maybe it’s taking the kids camping again or an impromptu trip to the beach. Sobriety gives you the time to build better relationships with those you care about most.

Taking a few months off from drinking will give you a lot of clear-headed clarity about you and your life. You’ll start to see where you’re making bad decisions and you’ll have the time to address problems, rather than drinking your way through them. It’s time to start creating a life that you don’t need to numb out or escape from.

Alcohol seriously disrupts your sleep. When you combine that sleep deprivation with a hangover, you feel pretty sluggish and awful. Sober, you start each day off on the right foot and you’re far more likely to do things like exercise and eat proper, nourishing foods.

The vanity argument for stopping drinking motivates a lot of people and rightly so. Alcohol dehydrates the skin, increases redness and can make you puffy and bloated. Basically, it’s not a good look, especially in summer when you don’t want to be wearing tons of makeup. (I wrote about the beauty benefits of sobriety in more detail here.)

Here’s a quick bit of calorie maths for you: a large glass of wine contains approximately 200 calories. That’s the same as eating a doughnut. A bottle of wine has around 600 calories, the equivalent of 3 doughnuts. By cutting out booze you can trim down without having to go on a strict diet. Bring on the ice cream!

Being able to socialise sober is a really good skill to have – there’s something incredibly powerful about realising you can handle events and have a good time without alcohol. Don’t make assumptions about what it’s going to be like. If you’ve not been to a party sober since you were a teenager then you’re probably a little out of practice!

When you’re drinking, you throw money down the drain every single day. If you’re buying a few bottles here and there, it can quickly add up without you knowing. I did a poll of some of the women I’ve coached and on average, they saved £350 in six weeks – that’s $446 US dollars. Don’t put this spare cash in your piggy bank – spend it on yourself! You deserve it.

When you’re trying to moderate, you have that constant ‘Will I? Won’t I?’ battle. Taking a summer break from drinking takes that issue off the table. There’s no need to waste hours wrestling with yourself because you’ve already made the decision; now you’re free to focus on other things.

An alcohol-free summer means you won’t have any booze-fuelled meltdowns that you’ll have to apologise for later. You’ll also skip the emotional hangover that comes with drinking. That alone is pretty much worth it, because that morning-after anxiety, guilt and regret is incredibly draining.

10. You’ll make the most of your holidays

Lying in your hotel room feeling ill is not a good way to spend your hard-earned time off. Without a hangover, you can get out there and explore. And with that free time, who knows what new things you might discover, or what exciting life experiences could be waiting around the corner.

I think you’ll be amazed at how much changes when you take a proper break from booze. Get out there and enjoy summer while it’s still here – no drinks required 🙂