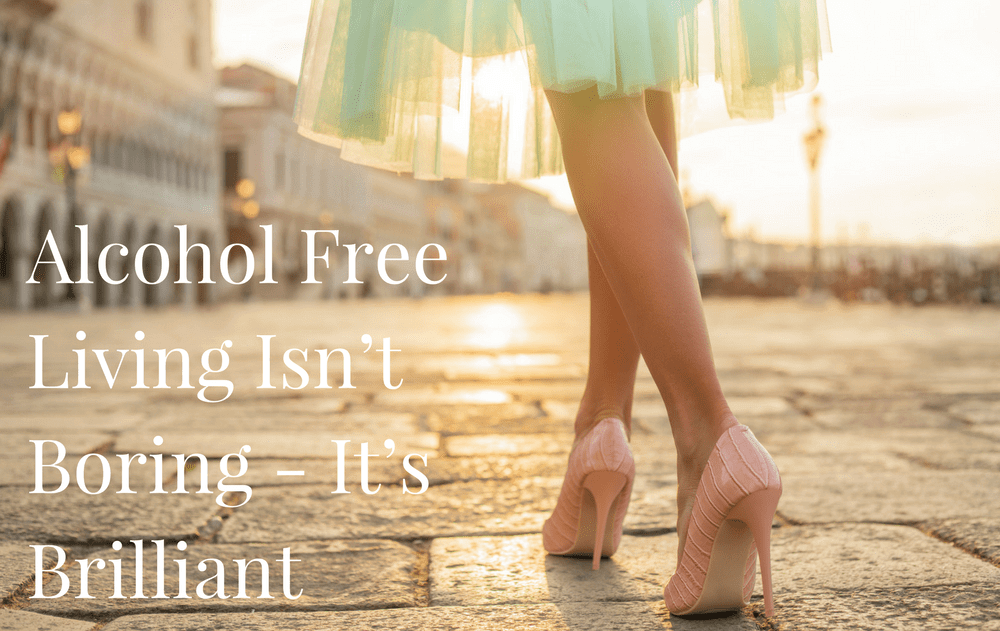 I’m writing this from a little French café on the banks of the River Aisne.
.

I’m on holiday, the sun is shining… and I’m drinking my second café au lait.

It’s at times like this that I think, wow – alcohol free living is pretty flipping amazing. That thought is often followed by: why did no one tell me it was going to be like this?!

Back when I was drinking way too much (and feeling hungover all the time) sobriety sounded like a last resort. Something to be avoided at all costs. It seemed dull, bleak and oh so boring.

I know I’m not the only one who felt like that. Convincing yourself that sobriety is going to be dull is a very common sabotaging behaviour.

Here are some tips to help you get clear on this myth:

Being drunk isn’t the same as having fun

Sobriety means you notice what’s happening around you and that’s a good thing.

Even bad experiences provide valuable information about your life. You shouldn’t need to numb yourself with alcohol in order to tolerate people you like or places you love. It’s much better to know and understand what the real you enjoys.

Focus on the story you’re telling yourself

Your mind is extremely powerful and often, what you believe to be true, will become true.

If you believe alcohol is key to happiness, then you will be miserable without it.

Just look at the way other people behave when they’re unexpectedly forced to be the designated driver; they believe the night is going to be boring before it even gets started. They believe they’re going to feel left out and so guess what? They do.

Think back to a recent good night out. What role did alcohol play in the success of the event, compared to: the people you were with, the conversations you had, the atmosphere, the mood you were in, your outfit, the location, the music, the food, what you’d done earlier in the day, and your general sense of well-being?

There are many, MANY things that determine how joyful a situation is. Yet for some reason, we live in a culture that tends to give alcohol the credit for everything positive! Make sure you don’t do the same.

Look to the comedians

You don’t need to drink in order to be funny or have a laugh. Just look at Jim Carrey, Russell Brand, Peter Kay, Lee Evans, Billy Connolly, Frankie Boyle… there are so many comedians out there who don’t drink or hardly drink.

I went to the Edinburgh Fringe (a comedy festival) a few weeks back and saw performers getting on stage as early as 11.30am. They weren’t drunk and neither were the crowd.

(I should add, I was sooo glad not to be hungover in Edinburgh – we packed 11 great shows into 3 days. I would never have seen that many if I was feeling less than 100%.)

Don’t let thoughts about being ‘a boring sober person’ creep in!

Yes, there will always be boozers who think you’re weird for not drinking and who take it upon themselves to give you a hard time about it.

(I don’t know why they think that’s ok – we no longer bully people into smoking, so why drinking?)

If someone is questioning your choice not to drink, you have to ask why they’re doing that. Why are they so bothered about you letting go of a habit that’s been getting you down and keeping you stuck in the same old routine?

Remember that life without alcohol is just… LIFE!

A while back I received an email from a reader suggesting I write a blog post about how to make friends sober. I mulled this over for a while, feeling unusually stuck for what to write.

Alcohol isn’t some magic thing that bonds people together or seals friendships. Bonding with people is about listening, sharing, caring and connecting. Those things have nothing to do with booze.

My point is that alcohol is NOT an essential part of life. And sobriety is not some parallel universe where all the rules are different and you have to do everything a completely different way.

So, if you stop drinking and things start feeling a bit boring, the question to ask is why. WHY are you bored? How can you change that? (Alcohol won’t fix anything – it just masks and hides.)

What can you do to build a life that’s so good, you don’t need to drink your way through it?