8 Myths About Non-Drinkers (And Why They’re Wrong) 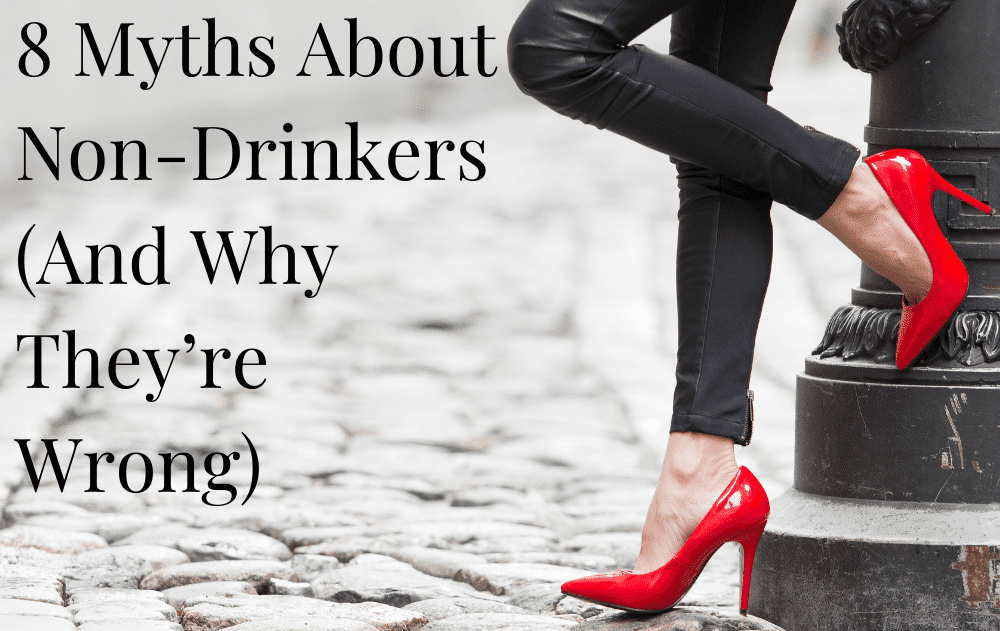 There are so many myths about non-drinkers and what it’s like to be sober.

“So… how do you have fun then?
“Don’t you get bored?”
“Is it because you’re religious?”
“I bet you still miss drinking.”
“Do you go to bars anymore?”

Since I stopped drinking, I’ve been asked ALL of these questions. Several times!

The problem is that these assumptions get repeated so often, they become ingrained in our culture and accepted as facts.

Today I want to dispel a few of the most common, crazy myths about non-drinkers.

Don’t let this nonsense hold you back from a hangover-free lifestyle!

Myth 1: We constantly pine for alcohol

I’ve been sober for more than 6 years and I never, ever miss it. Seriously. I’m not ‘battling the demon drink’ or ‘taking it one day at a time’. I’m not moping around, feeling as if my life lacks that special something.

I have no more desire to drink than I do to smoke cigarettes, take heroin or stick a fork in my eye. And I know lots of other non-drinkers who feel exactly the same way.

Once you cut through the social conditioning and educate yourself about booze, you start to see alcohol for what it really is – a beautifully packaged, brain-bending substance that delivers an artificial high, followed by a giant, soul-sucking low.

Myth 2: We all go to meetings

AA just doesn’t work for everyone. One of the reasons I created  The Sober School (and my stop drinking course, Getting Unstuck) is because I wanted people to have more options. There is no ‘right’ way of quitting drinking – one pathway to recovery is never going to suit everyone.

You don’t have to go to meetings and you don’t have to label yourself. You can simply decide to stop drinking. Some people do it on their own, while others use books, counsellors or seek out help online.

Myth 3: We miss our old life

One of the reasons I stopped drinking was because I had a nagging feeling that I’d lived the same year twice; I was making the exact same mistakes and repeating the same frustrations and struggles.

When I look back on my drinking days, I don’t miss them at all. What stands out is how boring, dull and repetitive they were – nothing like my life is now. The sober version of me gets up to much more exciting things!

Some people do have a dramatic rock bottom – a wake up call they can’t ignore. However, just as many don’t. Most non drinkers have just quietly decided to quit because they didn’t like the way alcohol was making them feel.

If you suspect that you might be better off without booze (and it’s ok if you’re not sure) then that is reason enough to take a break for a while. I wrote more about the myth of rock bottom right here.

Myth 5: We judge people who do drink

One thing I’ve noticed is that most non-drinkers are pretty open minded – after all, we’ve been there and done it ourselves. Personally, I have no problem with other people drinking. If alcohol is working for you, then great.

The only time I have an issue with other drinkers is if they make my sobriety an issue. The contents of my glass are not their business. So if they turn it into a big deal, it tends to reveal a lot about them and their relationship with alcohol.

One of the biggest myths about non-drinkers is that our lives become boring, because we’re no longer using a drug like alcohol. There’s an assumption that life without booze is ‘less’ somehow; less fun, less intense, less everything.

In fact, the opposite is true. The only thing ‘missing’ in my sober life are the killer hangovers, and I’m fine with that. Alcohol-free living gives you the time, energy and headspace to craft a life you genuinely love. One that’s so good, you don’t need to numb yourself from it.

You can be sober and still like dancing, good music and the company of other humans. And if that happens to be in a bar or at a party, then so be it! Being sober does not mean living like a loser and never going out or having fun.

It is incredibly satisfying to have an amazing night out and know that a) you’ve created some great memories that you’ll remember clearly and b) the way you’re feeling is all genuine, because your feelings haven’t been chemically altered in any way.

Myth 8: We’re happy to make do with any old drink

I might not drink alcohol anymore, but I still have taste buds! I love the ritual of having a nice drink to unwind with at the end of the day – something that looks and feels feels special.

Fortunately, the alcohol-free drinks market is booming right now. High-end bars are serving delicious, alcohol-free drinks that are made with as much care and attention as the cocktails. Even my local pub has acquired an impressive range of ‘grown up’ soft drinks. Times are changing!