Lessons From A Week Of Networking & Socialising Sober 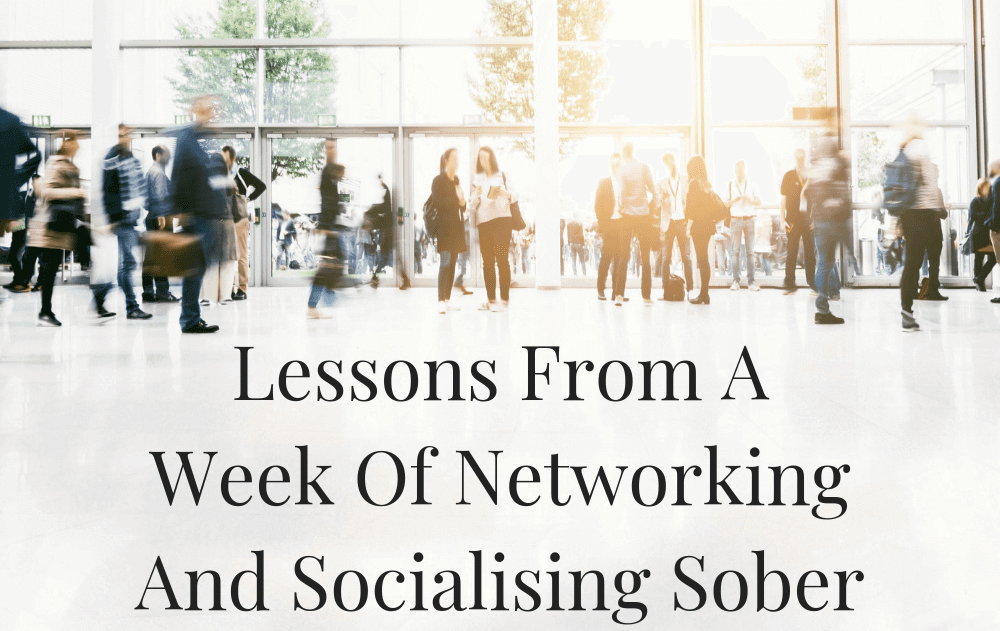 I’m writing this from Orlando airport as I wait to catch my flight back to the UK.

It’s been a busy few days for me – I’ve attended two different conferences, one in London and one here in Florida. My head is spinning after a week of learning new things and meeting new people.

And to be honest, networking REALLY pushes me out of my comfort zone.

Small talk, chatting to strangers and meeting lots of new people is basically my idea of hell 😬

(The old me would definitely have drunk my way through things like this.)

If you’re struggling to get your head around the idea of socialising sober, this blog is for you. Here are a few things I’ve realised this week:

Socialising sober is something we all do – ALL the time!

We tend to associate networking and being social with bars and booze, so it’s no wonder it seems intimidating to do this stuff sober.

However, most of us do an incredible amount of sober socialising every single day, without even realising.

We chat with strangers in business meetings, catch up with friends over coffee, banter with our workmates or talk to people in our yoga class.

So why is it that when the clock strikes 5pm, we fall into the trap of thinking the only way to socialise is with the aid of a drug like alcohol?! It doesn’t make sense.

People can seem more obsessed with drinking than they really are

I paid close attention to what people were saying during my trip. My conferences weren’t sobriety related, so I heard a lot of “We must go for drinks!” and ‘“Let’s catch up in the bar later” etc etc. In early sobriety, I would’ve felt alienated by all the alcohol references.

Nowadays, I realise booze is just part of the way we communicate with one another. Most of the time, people aren’t really saying ‘let’s get wasted’ or ‘you must drink alcohol with me later.’

What they actually mean is, ‘I’d like to spend some time with you.’ But it feels a bit awkward to say that, so instead we opt for something safe like “Let’s go for drinks!”

No one noticed what was in my glass

When I first quit, I often felt as if there was a neon sign above my head that said ‘Oi, over here, this person isn’t drinking!’ I worried that I wouldn’t fit in or people wouldn’t trust me if I didn’t drink.

Nowadays, I don’t feel so anxious – mainly because I’ve realised most people don’t notice, or don’t care, what’s in your glass.

During this trip, not a single person commented on what I was drinking. Not one. No one made me feel weird or different, it simply wasn’t an issue.

Most people don’t drink that much

I’ve written before about the way our culture’s changing, with teetotalism becoming more mainstream. At both events there was a big focus on going for drinks in the evening, but (in my opinion) no one seemed to be drinking all that much.

Perhaps people just didn’t want to be hungover the next day. Whatever the reason, I think the old, boozy version me would’ve been very frustrated by how restrained the other drinkers were!

It’s great to be heading home knowing that I genuinely had a good time – my emotions weren’t fake or chemically altered in any way. My head is clear and my memory is sharp, but I am SO tired!

In my drinking days, I’d totally ignore feelings like this – I’d just keep going, pushing on to the next thing and the next thing, relying on booze to help me switch off when it all became too much.

As a natural introvert I’ve realised it’s important for my self care to decompress after trips like this. I’m really looking forward to hermiting at home for a bit – and I won’t feel guilty about doing so 🙂

What are your experiences of networking and sober socialising? Do you have a great tip that would help me or anyone else in future? I’d love to hear how you manage events that push you out of your comfort zone!