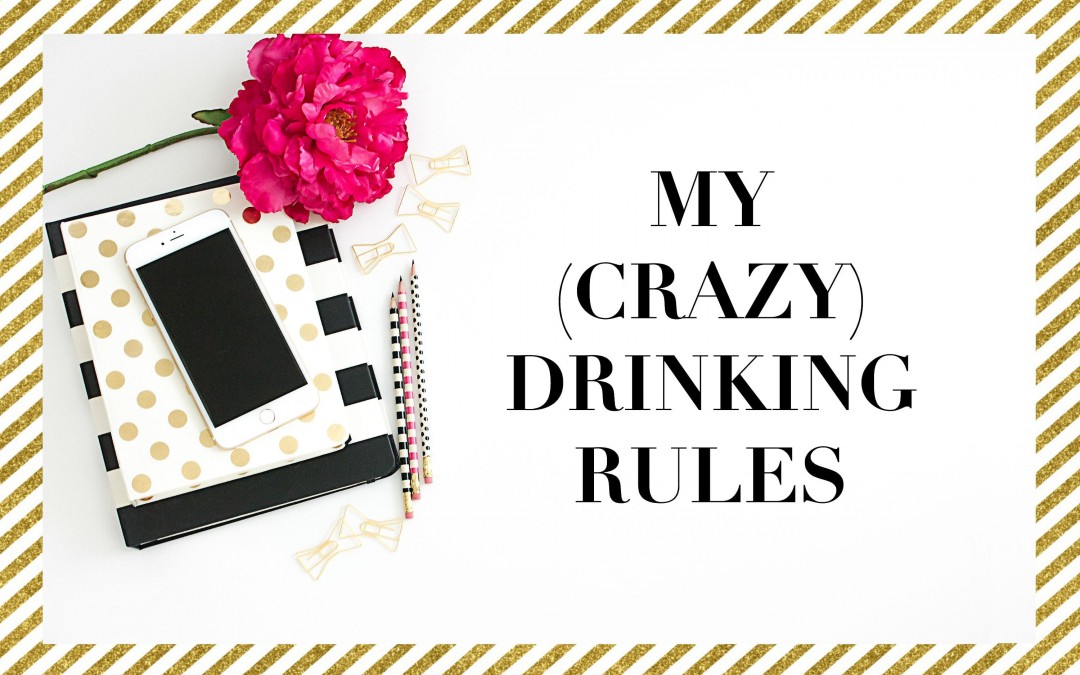 The Rules. Ah… the rules. Completely self imposed, they governed much of my drinking life. Long before I really acknowledged I had a problem, I was creating rules about when I could drink and how much I could have. The Rules were my way of trying to reign in my drinking. Initially it was stuff like ‘no drinking during the week’. This quickly became, ‘no drinking during the week, except on Wednesdays and Fridays’ (and sometimes Thursdays). I also had rules about only drinking one type of drink, alternating every alcoholic drink with water and not keeping spare alcohol at home.

Of course, I rarely stuck to the rules. And the more I broke them, the more ridiculous they became. At one point, when I knew I was drinking too much at home, I decided to ban any alcohol crossing my doorstep. A masterstroke I thought, until I just started going out more. And when I couldn’t face a quiet night in, I’d go to the cinema, alone, and drink an entire bottle of wine with my popcorn. I wasn’t breaking the rules, right? Eventually I tweaked the rule a little, so that alcohol was still banned from my flat, except the bathroom. I figured that because I didn’t really want to drink in the bathroom, I wouldn’t do it. But you can guess how that worked out.

Looking back, these rules sound completely … what is the word? Oh yeah: insane. Absolutely bonkers. There should have been flashing red lights and alarm bells going off left, right and centre. But my obsession with setting rules came from a well-intentioned place. I’d read lots of tips about cutting down on sites like Drinkaware. They recommend having nights off, staying hydrated, measuring out spirits at home and keeping track of units. They all seemed like admirable goals to me. I wanted to drink less. And somehow, in my mind, drinking alone in the bathroom just became an extension of those official guidelines.

Nowadays I have mixed feelings about the idea of cutting down. Reading back through the list of Drinkaware tips I can see how the advice might help some people, but not others. I think many people just fall into the habit of drinking too much, but they don’t have a truly problematic relationship with alcohol. These people are able to learn new habits around booze. But other people –  like me –  find cutting back isn’t enough.

Trying to control my intake left me feeling incredibly deprived and I could never stick to it. I couldn’t understand why this was, because in every other area of my life I was quite motivated. If I wanted to lose weight or save money, I just did it. But controlling my drinking was like trying to keep the lid closed on a can of super strong, wriggly worms. I had to put so much energy into keeping it under control, it was exhausting. And despite my best efforts, every now and then the lid would just blow right off.

I’m reading Alastair Campbell’s book Winners at the moment. In it he discusses teamship, and the importance of operating a FIFO approach: fit in or fuck off. I must say I rather like this idea and it neatly sums up my experience of cutting down. I tried to control alcohol. I wanted it to be part of my team, my life. But there came a point where it just wasn’t fitting in. I realised it was driving a bulldozer through my life. So it was time for it to fuck off.

I’m not saying that cutting down is a bad idea. It does work for some people and can lead to a very positive behaviour change. In fact, if you’re worried about your drinking, trying to cut down is a good place to start. But I think many of you might be reading this because you keep trying and failing to cut back. If that’s happening to you, it could be time to think about stopping altogether, drastic as it seems.

Logic tells us that if it’s hard to cut back then stopping altogether will be even harder. I disagree. Once you’ve got the hang of sobriety, it’s much easier to not drink at all than to be locked in an internal battle over how much you will let yourself have. Consciously exercising control over your intake is hard work. Not to mention the fact that alcohol does a pretty good job of weakening our resolve. Taking that mental battle away is a weight off your shoulders. And once sobriety becomes second nature, there’s real joy in knowing that you’re free, and that you don’t have to drink anymore.

What are your experiences in cutting down? I’d be interested in your thoughts.