Should I cut down or quit? 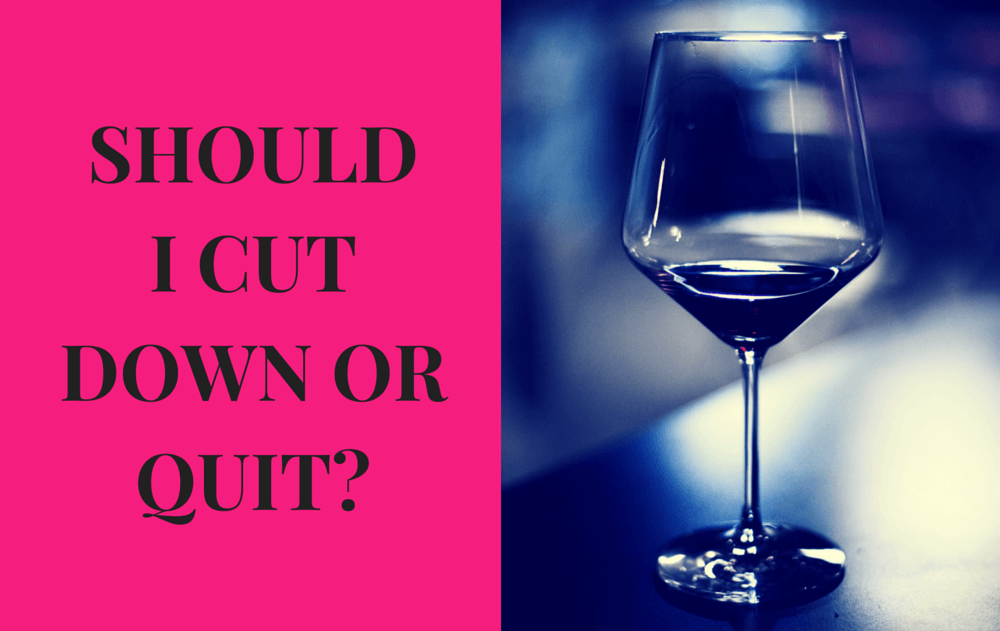 There is this thing that most of us lust after at some point. It’s the idea of “just one drink”. You know how it is. Unexpectedly, you start to think about how nice it would be to have a drink. Just a cheeky pint at lunchtime. A glass of wine before dinner. A quick drink after work. Just one.

After all, a bit of what you fancy does you good, doesn’t it? You start hearing that little voice in your head that insists it will be different this time. You think: after all the remorse I felt last time, I know the score. I’ll never make the same mistakes again. A drink or two won’t hurt.”

Personally, I found one drink was never really enough. It’s probably because deep down I never actually wanted one – I wanted ten. I was never physically dependent on alcohol, but one single glass of wine? Never gonna happen.

The really confusing thing was that after a period of abstinence, I could have just a glass and stop. Sometimes I was able to have two drinks. But time and time again, that experience proved to be a snare. It persuaded me I could drink moderately, when I couldn’t. Everything would be ok for a bit, until it suddenly wasn’t. I’d be back to square one: full on drinking with no off-switch and plenty of regrets the next day.

In AA, the basic adage is that it’s the first drink that causes the problem because it opens the field for a second and then a third. But there are other treatments – including those supported by the NHS – where abstinence is not the only goal. Experts argue that alcohol dependence is on a continuum and therefore saying ‘one must never drink again’ over simplifies matters. It can even deter people from seeking help. Research has found it is possible for some drinkers to moderate. A study of people who took part in Dry January last year found that 72% were still drinking less, six months later.

So should you cut down or should quitting alcohol completely be your goal? Ultimately it’s a decision that only you can make. The Sober School supports a broad range of people, from those looking to cut back, take a break from alcohol or stop completely.

I get a lot of emails from people trying to make this decision and it’s something I wrestled with myself. So here are my thoughts, for what it’s worth. I think moderation is often mis-sold as an easier option than complete abstinence. In reality, cutting back requires just as much willpower, discipline and control as stopping completely does. The only difference is that if you’re still drinking, you need to exercise all of the above whilst under the influence of a mind altering, resolve-weakening substance.

We don’t advocate moderation with other addictive, poisonous substances. You wouldn’t tell a heroin user to try and cut back. Can you imagine? “Oh you’ll be fine love. As long as you’re only shooting up at the weekend you don’t need to worry.” We don’t even tell smokers to moderate. The goal is always to get smokers to stop. Stoptober is around the corner and the campaign’s tag line is “stop smoking for 28 days and you’re 5 times more likely to stop for good.”

My biggest concern about moderation is that it reinforces the myth that sobriety is absolutely terrible and alcohol is Mr Wonderful. There’s this idea that going teetotal is the thing you have to do when everything else has failed – it is something inflicted on people who just can’t control their drink. That’s simply not true. Sobriety brings so many benefits (I wrote about them here) and I wish more was done to portray sobriety in a positive light.

Here’s my final thought on moderation. They say the definition of insanity is ‘doing the same thing over and over again and expecting a different outcome’. If cutting back seems to be working for you then great, stick at it. But it you’re repeatedly drinking more than you intended and it’s making you miserable, then maybe – just maybe – it’s time to think about taking a different approach.