The alcohol illusion at Christmas 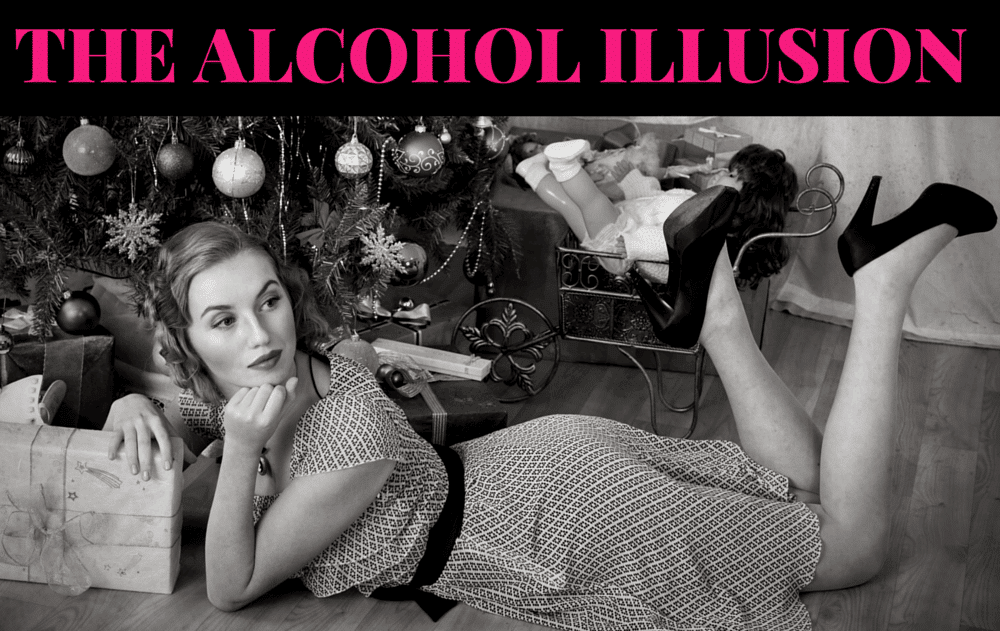 Sometimes I think the festive season should really be called ‘booze season’. From the beginning of December until the 1st of January, people go slightly bonkers in the name of celebrating Christmas. And as any sober person knows, where there is mass celebration, mass drinking is never far behind.

Don’t get me wrong, I absolutely love Christmas. And I’ve got no problem with other people drinking, if that’s how they have a good time. But still, I can’t help noticing how present booze is in our lives during the festive period.

Whether it’s the work night out or a trip to the Christmas markets, alcohol is frequently shoved in your face. When you’re newly sober – or struggling to stop – it feels like a constant reminder that you’re different and strange for trying not to drink. The endless pro drinking messages don’t just appear in advertising; they’re reinforced by the beliefs of those around us. Christmas sure is great for niggling away at your resolve and filling your mind with doubts.

The really important thing to do at this time is to make sure you see the alcohol illusion for the con it really is. Nobody needs alcohol in order to have a good time or celebrate properly. It’s a total myth. It’s a marketing trick that thousands of people have fallen for. It’s not the contents of your glass that delivers a magical Christmas: it’s what’s inside you. It’s the people you’re with and where you are and the mood you’re in. You don’t need alcohol any more than you need cigarettes or heroin or any other drug.

It wasn’t so long ago that smoking was considered cool and glamorous and an essential part of having fun. Even Santa smoked. These cigarette ads seem pretty outrageous now, but how different are they to the alcohol adverts of today? It’s all marketing / brainwashing. Right now, drinking is considered fun and sexy but maybe in a few years’ time we’ll look back and think how weird it was that everyone drank so much. Maybe society will have moved on to some other drug by then – probably some legal high that hasn’t yet been invented.

This year will be my third sober silly season and I’m not terribly worried about it. I know that not drinking gives me the best shot of having a happy Christmas. I never, ever look at alcohol any more and think ‘gosh I’d love a glass of that’. But occasionally I get the odd woe-is-me pang when I hear people planning a big night out and the various ways they are going to get wasted. It’s not that I want to get drunk; it’s more that I don’t want to miss out on a group activity.

It’s a bit like that episode of Friends when Rachel tries to take up smoking because she doesn’t like missing out on the conversations her boss has with everyone during the smoking break. She wants to fit in, so she starts joining them for some ‘fresh air’ and even pretends to smoke with them.

I know where she’s coming from. There is a certain level of camaraderie in taking a drug in a group setting – you can’t argue with that. And here lies the problem with Christmas. The festive season is effectively one giant drug taking session, with booze the poison of choice. And whenever people are doing things on mass, it takes confidence to be the one that does something different.

So, this Christmas make sure you don’t fall for the hype! It’s hard, I know, when you’re new to this and boozy images are in your face all the time. Remember, alcohol creates a good illusion but rarely delivers on its promises. Count yourself lucky that you are getting this opportunity to have a REAL Christmas and experience true joy, without a mind altering drug distorting your perception of it!